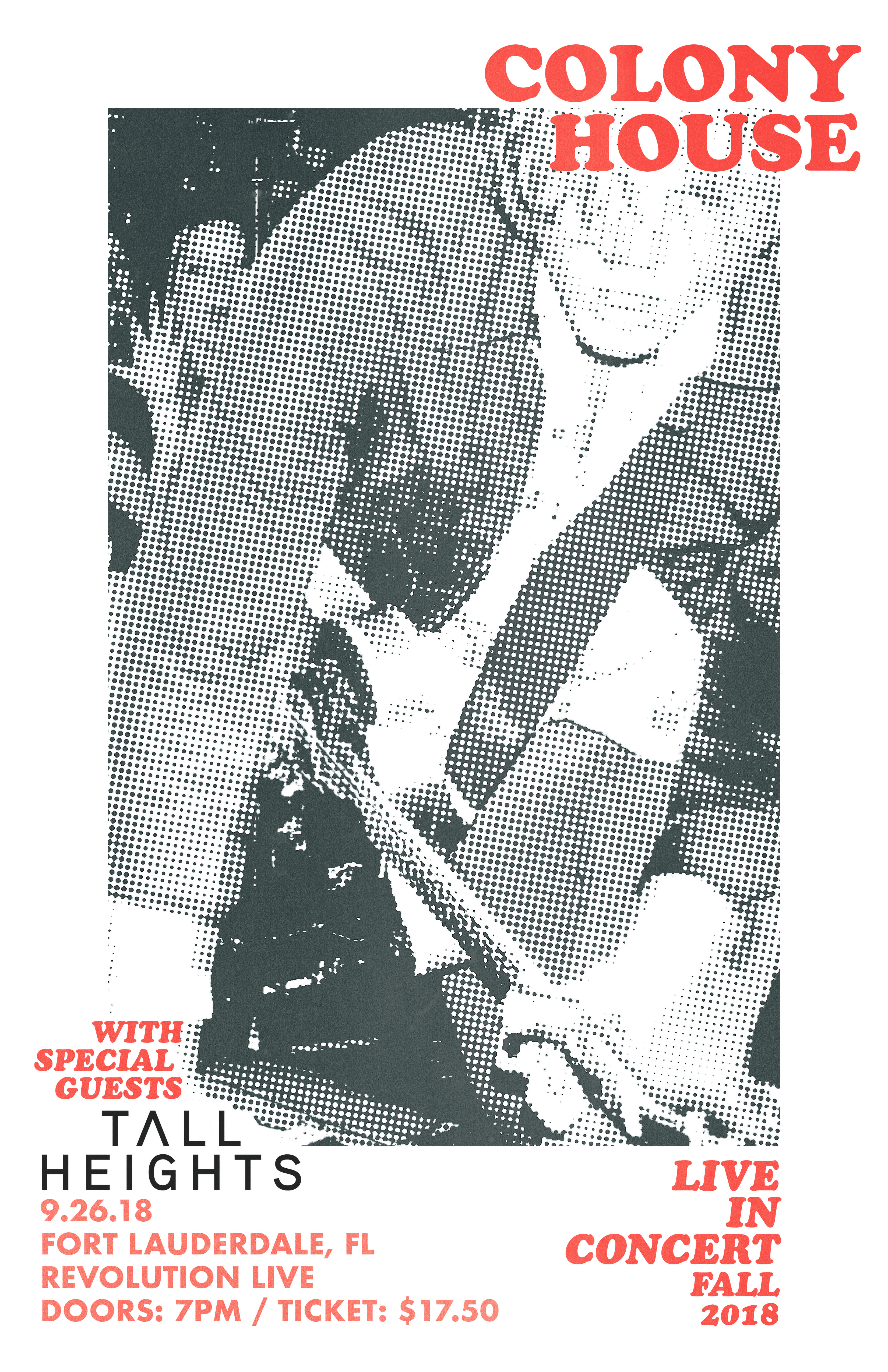 Colony House is gearing up to release their major label debut, Only the Lonely, via Descendant/RCA. The title is a shout-out to the king of elegiac melancholy – “Obviously it’s a direct Roy Orbison reference,” says Caleb. And that might initially seem at odds with Colony House’s sound, a madcap aural rollercoaster borrowing from the anthemic swell of the Killers to the harmonic sass of the Beach Boys to the wit of Vampire Weekend. But beneath the band’s whirlwind of ecstatic guitar playing and intricate melodies you’ll find their real signature: emotion. They write about being desperately lonely. They write about being desperately joyful. But what makes a Colony House song a Colony House song is the sheer feeling it conveys. “We want to connect with people,” explains Caleb, mentioning a favorite quote by van Gogh. There’s a great fire that burns within me but no one stops to warm themselves by it, and passersby only see a wisp of smoke. “I mean, this is Vincent van Gogh we’re talking about!” he continues. “The whole world knows his work! But he felt this loneliness, this sense of, I have so much I have to offer but no one stops to see it.” Colony House’s primary aim is to see that fire. To witness it, as Caleb puts it, “in ourselves, and in the people that come to see us play. That’s what we’re about.”

If this sounds like an unusually high-minded goal for a bunch of twenty-something dudes in a rock and roll band, there’s a reason for that: The guys in Colony House may be young, but they’re serious about their work. And they’ve been at it a while. “So … me and my brother, we know each other for obvious reasons,” says Caleb, as he begins to explain how they all met. Caleb is older, “by sixteen months,” he points out. “I think we have twin tendencies.” The two brothers come from a long line of musicians. “If you’re ever in Paducah, Kentucky and you see ‘Chapman Music’ on the side of the road, that’s my grandpa’s music shop,” Caleb says. Grandpa Chapman’s son, Steven Curtis Chapman, Caleb and Will’s dad, is also a musician. He grew up “playing southern gospel and bluegrass,” in Kentucky, Caleb says, then moved to Nashville and became a songwriter. “He found success in the contemporary Christian music world,” Caleb continues. “This is a proud son thing to say, but he really helped shape what that industry is.” For Will and Caleb, visiting dad at the office meant climbing aboard a tour bus. “That’s what really inspired me and my brother to start playing music,” Caleb recalls. “We were like, we want to do what dad does.”

Knowing what you want to do and actually doing it are two different things. It took the Chapman brothers a while, but by the end of 2009, around the time they met Scott, things really started to gel. “My cousin brought him to our little sister’s birthday party, and he’s like, Scott plays guitar if you ever need a guitar player.” They actually did, and eventually Scott became the first guy in the band not named Chapman. Scott knew of Parke from back home in Knoxville. He had a reputation as killer guitarist and piano player, but they’d never met until Colony House asked Parke to open up, as a solo artist, for one of their Knoxville shows. He did. It went very well. And thus began a multi-year getting-to- know-you period between Colony House and Parke. Three years after that show in Knoxville, Colony House asked Parke to come out and play bass with them for a couple weeks. Parke borrowed a friend’s bass, met the guys in Atlanta, and has played every show since. He was officially added to the line-up in the spring of this year.

It matters, when you tour with the intensity Colony House tours, that all the people you’re sharing a van with have your back. And it matters that all the people waiting for you back at home do too. “For us at least, they go hand in hand,” Caleb says. “If you’re falling apart in one place, it directly impacts the other.” After the band released their 2014 debut (on Descendant) they proceeded to play over 200 shows the following year in support of it. “We wouldn’t want to be anywhere else, this is the dream,” says Caleb. “But it’s also work.” Discovering that they could be exactly where they wanted to be, living the dream out on the road while simultaneously missing home gave the band a new insight into what they see as a universal human struggle. “Everyone has things they miss, everyone has things they’re worried about – even when life is going great, it can still feel hard, and there’s no shame in saying that, there is no shame in saying you’re lonely or sad, that’s part of the beauty of life,” Caleb says.