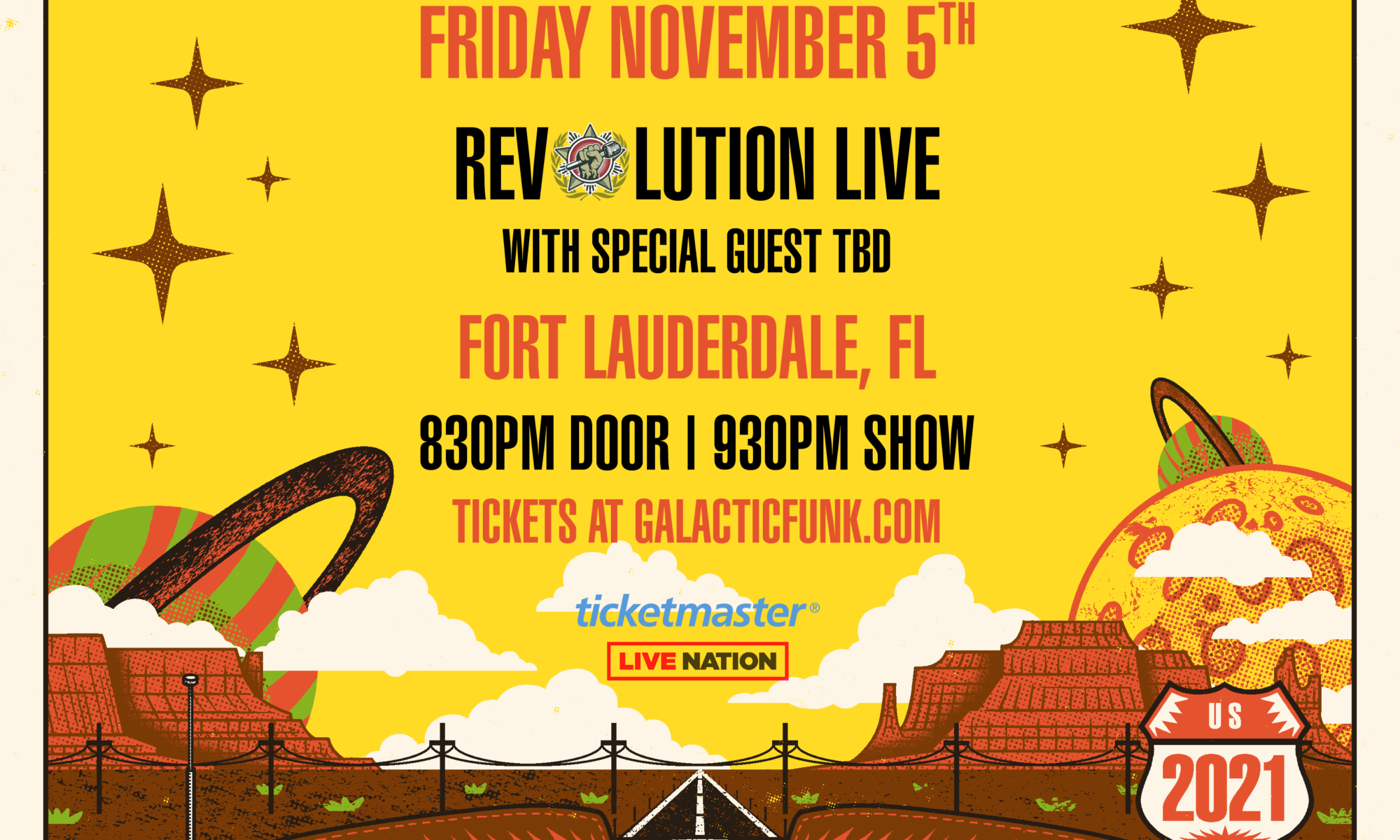 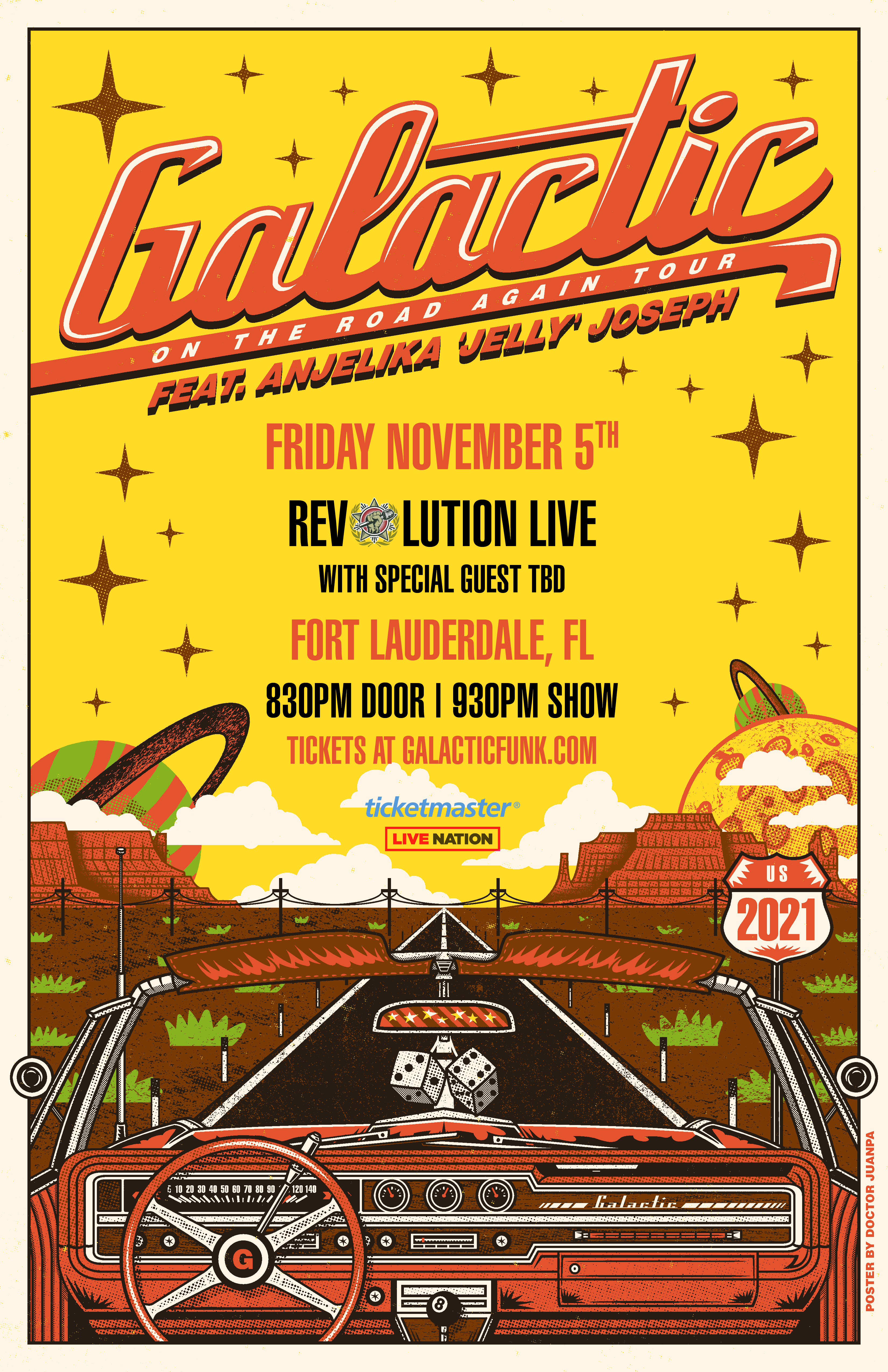 Galactic’s first new studio album in more than three years, ALREADY READY ALREADY – released on their own Tchuop-Zilla Records – sees the renowned New Orleans based instrumental outfit taking a distinctly contemporary approach towards their own progressive sound, interpolating modern rhythms and electronic instrumentation within the house-shaking framework of the Crescent City’s funk pop ‘n’ roll. Produced by ​the band’s Robert Mercurio and Ben Ellman, the new LP finds Galactic once again enlisting a diverse array of vocal collaborators to assist in their musical exploration, each of whom lend lyrical flavor and individualistic personality to the band’s multi-faceted sonic grooves. Bookended by a high powered pair of trademark Galactic instrumentals that give the album its title, ALREADY READY ALREADY. The album is a short, sharp blast of undeniable creative muscle, from the stripped down kick/snap verses of “Going Straight Crazy,” featuring New Orleans singer (and YouTube sensation) Princess Shaw, to punk cabaret artist Boyfriend’s quirky speed-rap on the breakneck “Dance At My Funeral.” As ever, Galactic’s omnivorous musical interests make easy classification utterly impossible – ALREADY READY ALREADY is as all encompassing and universal as the band’s moniker established long ago.

“I’ve never been able to put a label on what we do,” Ellman says. “I could say it’s funk or I could say it’s R&B or jazz or whatever else, but really, it’s all of that.”

“It’s not that we’re always trying to push boundaries,” says Mercurio, “but we definitely take influence from our hometown and try to do something new with it. We tour all around the world and we’re exposed to tons of elements that filter their way into our consciousness and come out through our music.”

Though their hearts are always in New Orleans, Galactic spends virtually all its life on the road, leaving limited timeframes in which to record. Whenever time allowed, the group holed up at their studio headquarters, Number C, where they were free to experiment and develop new ideas.

“Having our own studio allows to not be on some schedule,” Ellman says, “where we have to have material, save up some money, book the studio, and that’s the time we have to make a record. It’s a completely different process, where we can always be working on music.”

Over time, the tracks revealed themselves as either instrumentals (like the slippery, dub-inflected “Goose Grease”) or vocal songs. The band, so well woven into their city’s ever-changing music scene, began to thumb through their little black book in search of collaborators.

“Our community is so rich with talent,” Ellman says. “We’re just lucky to be in a situation where we can make phone calls, then someone comes to the studio, we kick it, start working on things. It’s all really organic.”

Galactic brought in a diverse array of predominantly young female singers, each of whom brings their own disparate musical tastes and cultural flavor. Working with artists lesser known on the national stage but beloved in their own community enables Galactic to evince a kind of sonic truth about their hometown, putting its multi-faceted underground to the fore.

“Trust me, I loved having Macy Gray and Mavis Staples on our last record,” Mercurio says. “It was an honor to work with them. But there’s something fun about making music with someone not everybody has heard of and end up getting a great reaction to it. There are no preconceived thoughts as to what the song should be like because the listener doesn’t know the artist as well.”

That being said, a number of the voices heard on ALREADY READY ALREADY are Galactic veterans: “Touch Get Cut” features the band’s touring vocalist, Erica Falls, while “Clap Your Hands” is sung by Ms. Charm Taylor, previously featured on 2015’s acclaimed INTO THE DEEP. The lilting “Everlasting Light” teams Galactic with frequent collaborator, The Revivalists’ David Shaw, alongside Nahko of Nahko & Medicine For The People – the only non-New Orleans resident among the features.

As for working with Nahko, Ellman says, “We just liked his vocal.” “Being from New Orleans isn’t a prerequisite for working with us. You never want to be restricted, it’s whatever serves the song best.”

Galactic is, likely even at this very moment, on the road as usual, with Erica Falls putting her own stamp on ALREADY READY ALREADY’s songs as they manifest new shapes through live performance. As if their perpetual tour schedule weren’t enough, Galactic announce the band’s purchase and future stewardship of New Orleans’ legendary Tipitina’s nightclub.

“We’re so incredibly honored to be tasked as the current caretakers of such a historic venue,” says Ellman. “My connection with the club started way before I was lucky enough to take the stage. My first job in New Orleans was at Tipitina’s as a cook in the (now defunct) kitchen. The importance of respecting what Tip’s means for musicians and the city of New Orleans is not lost on us. We’re excited for the future of the club and look forward to all the amazing music and good times ahead.”

With that in mind, it turns out that, despite the lack of released work, the past three years have in fact been remarkably prolific for Galactic. The sessions that yielded ALREADY READY ALREADY will generate still another LP due later in 2019, one which Ellman describes as “possibly more of a throwback thing” but will almost certainly morph into something altogether new and wonderful via Galactic’s evolutionary musical vision.

“There’s no telling what those songs will sound like when we’re through,” Mercurio says. “Once we get in there and start twisting them, see what perks up our ears, stuff can definitely take a left turn. That’s kind of the story of Galactic right there – we’re constantly taking left turns. I wonder what it would be like if we took a right…?”