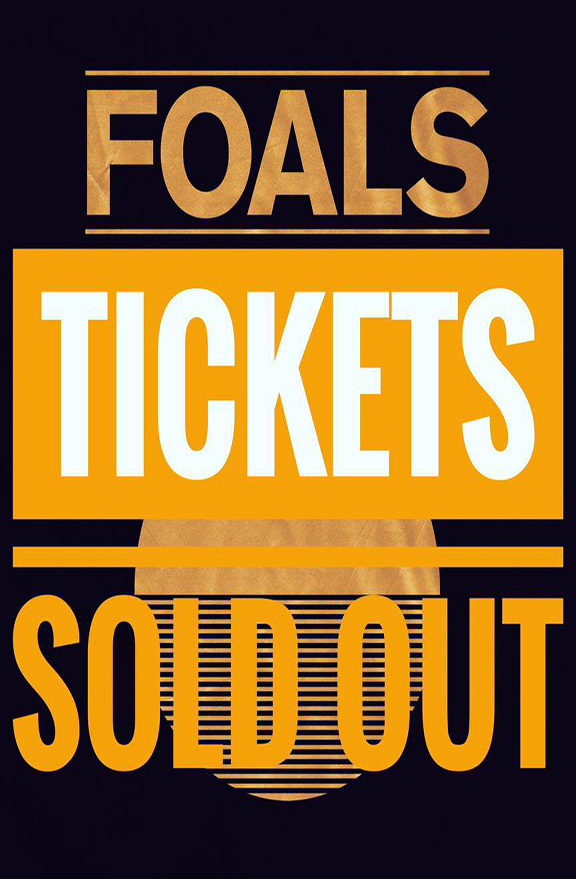 On an unseasonably warm night in March, 2013, within the august, hallowed walls of the Royal Albert Hall in London, something extraordinary happened. Five musicians took to the stage, launched into a song called Inhaler, and blew the roof off. For the 5,000-plus people who were lucky enough to be present that evening, the experience was more like a mass epiphany at a revivalist meeting than a gig. Foals whipped up a frenzy and sent it hurtling towards the audience, who gave it a shake and sent it hurtling right back. Two hours later, we staggered, reeling, out into the night. This was more than music. This was alchemy.

But then, inevitably, came the fear. Could the band ever match this?  My advice for the fretters is simple: put on track one – the title track and lead single – of Foals’s visceral new album, What Went Down. Put it on anywhere – on your headphones, in the car, in the great wide open, and put it on LOUD. “I buried my heart in the hole in the ground,” sings Yannis Philippakis, like a fire-and-brimstone preacher in a Deep South prayer house, over eerie, pitch-shifting organ. “With the lights and the roses and the cowards downtown. They threw me a party, there was no one around. They tried to call my girl but she could not be found.” That’s when the beat kicks in, a giant Motorik beast of a thing that hurls the song forwards. A lowering, syncopating theme enters the picture, threatening to drag the song down into the depths. And, oh God, here’s the chorus. It doesn’t just arrive, it explodes. “When I see a man I see a lion,” Yannis screams. “When I see a man I see a LIAR.” Radiant, roiling, roistering, rabble-rousing: this is music that is at once beautiful and hellish, euphoric and demonic. What, and you were worried Foals couldn’t match what they’d created before? Match it? They’ve fucking left it for dust.

It cannot be the case that one type of music can be more resonant, more significant, than another. Music, from whatever genre, either connects or it doesn’t; not because it’s chart-pop, or alt-country, or deep house, or art-rock, but because it speaks to us, baffles us, ensnares us. Sometimes, though, a band will ride roughshod over that logic, will create something that takes music beyond the usual narrow considerations of chart placings and boy-meets-girl platitudes, and renders all around it irrelevant, trivial, disposable. All of the truly transformative and era-defining albums have grappled with questions that are a world away from the bland bleatings of homogenised pop. Permanence and impermanence, life and death, solitude, vulnerability, intimacy, passion, rage, humanity – weighty issues that make demands of the people creating that music, and of all those who listen to it, too.

What Went Down confronts these issues head-on. Recorded with James Ford (Arctic Monkeys, Florence + The Machine) in the same Provence village where, 127 years ago, the artist Van Gogh was hospitalised in a psychiatric ward after slicing off his ear, the album sees the band take their songwriting to a new level. Yet it was, says frontman Yannis Philippakis, the easiest to make. “We spent two months in the studio, and that’s quick for us. There’s a propensity in the band to over-think, and sometimes undo what had been great in the first place, out of boredom or restlessness – or a desire to make something better. But it rarely is. But I think we’d all have got bored of being in the band had we not had that restlessness. I mean, I can’t begin to imagine, or predict, what the next record will sound like, but thank god for that. There are so many bands where you just know what their next move will be, because it’ll be the same as their last one.”

No sooner had Foals rounded off their world tour for the Holy Fire album with an incendiary headlining set at last September’s Bestival, than they were back in the studio – and it’s that sense of urgency, Yannis says, that gives What Went Down its power. “By the time we got to Bestival, we were playing the best we ever have. I had this image of the band as this 10-legged beast, this ruthless, elegant machine, with everyone pulsing at exactly the same frequency. The five of us were at this level where the shows were still reckless and on fire, but it felt like we’d become this predatory animal, designed to annihilate the spaces we were in. The point is, if we’d had two months to deflate, to re-enter normal life, before going back into the studio, the new record would never have sounded like it does.”

Too often in the past, Yannis has been crudely characterised as a tormented, chain-smoking obsessive, as someone not liberated by music but driven half-mad by it – to the point where it’s tempting to feel that those doing such pigeonholing would rather musicians and songwriters were opinion-free automatons, trumpeting the light-entertainment party line. Do we seriously want that? Or do we want artists for whom creativity is like mortal combat, who bear the scars of those battles but don’t hesitate to re-enter the fray? Yannis is the first to admit that he’s a poor advertisement for the serenity that music is supposed to induce. But for him, that’s not the point. He’s not using music, using songwriting, to cauterise the wounds (wounds that most of us, if we’re honest, carry round with us, too). He’s using it to explore them, to attempt to understand them.

Writing the title track came about during a period , Yannis says, where he was “thinking a lot about masculinity, but also about being an animal, being violent and primal. When I sing that song I feel like I’m this fevered, skulking, brawling person. But again, there’s a vulnerability in there, too, and I think that’s got something to do with moving to London. I’d been in Oxford for so long, and I had to recontextualise myself, I’d marked the lampposts in Oxford, I knew my co-ordinates. In London, I thought, ‘I’m one of 10m people you know?’ It’s about trying to escape yourself, too; trying to tear everything away.”

The decision to work with James Ford was an easy one, Yannis says. “The chemistry was just immediately right. He doesn’t praise you, he’s very British in that respect. I remember, for the first few days in France, I’d be going, ‘Why’s he not being more encouraging?’ It took me a while to realise that that was a good thing.  There were two clear aims this time: a really lean sound, nothing extraneous, nothing too fluffy, trying to get away from some of the more epic tendencies the band have. At the same time, we wanted to explore the more experimental side of the band, and push the extremes out further, in every direction – to dial everything up, to make the heavy stuff even more menacing.”

Albatross, a pivotal track on the new album, is certainly that. The lyrics are like daggers, self-lacerating shards of mockery and disgust – you can almost hear Yannis’s lip curl as he rages against himself on lines such as “You’ve got a hundred broken wishbones under your bed / You’ve got a hungry green-eyed monster that you keep fed”, as the clattering house beat and glacial piano send the song galloping towards oblivion. It’s shivers-up-the-spine stuff, music that delves into the darkest reaches of your soul and leaves you feeling winded. It’s also brave, fearless and shockingly candid. The antithesis of talent-show warbling. Music as passion, fire and confrontation.

By contrast, the album’s astonishingly beautiful closing track, A Knife in the Ocean, is like the calm before the storm, but also the stillness and silence after it has passed. A song that addresses the ephemeral, fleeting nature of human existence, and our endearing but deluded attempts to defy that irrevocable reality, it opens with Tibetan bells, and a plainsong-like melody that conjures up a supplicant at prayer. “When I come to walk the line,” Yannis sings, “the fire it comes, but I’ll be just fine.” Yannis likens the narrator to “a young man, saying ‘I’m going out, what I’m going to face will be dangerous, and I may not return.’ On one level it’s about a sort of personal apocalypse, a personal oblivion, confronting the conveyor-belt nature of life, and becoming more aware of human frailty, and how that interacts with being a fairly confident, bullish individual. But it’s also about looking round at a city like London and thinking, ‘How could this ever cease to exist? Something this imposing? This evidence of human endeavour?’”

Again, the question needs to be asked: do we want music that shies away from the complexity of life, from the baggage we all, every one of us, carry, from the fear we all feel, from the rapture and thunderstruck love that somehow coexist with that fear? Or do we, rather, want music that confronts that? Four albums in, Foals continue to walk into the storm. They can’t not, say Yannis. “I decided that whatever I wanted to say, I was really going to say it in the lyrics this time; and that, sonically, we’d have the same approach. There are far fewer veils on this record. It’s unfettered communication, it’s the clearest distillation of me, of all of us. Before, there’s always been that gap between the imagination, the romance and fantasy about what we wanted to create, and the actual reality, and that disparity has been difficult. But on this record, we’re the closest we’ve ever been to the vision in our heads. I feel much more at ease in myself, definitely; that things have aligned for me, creatively, where I feel far more confident, and much closer to the goal than I was before. One thing that we really take pride in, really take great enjoyment from, is that, through a series of beautiful accidents, we’ve got to the position where there’s no tethering to any preconceived idea of what we should do. So it feels like we can do anything.”

My notes on What Went Down, taken when I first heard the album, look like automatic writing, a scribbled blur that makes me feel breathless if I read it back. On every page, the same words are repeated, always in capitals: SONG! LIVE!!! I am impatient to the point of petulance to see the band play new songs such as Night Swimmers (“Calypso!” “Tom Tom Club” “SONG!”), London Thunder (“Hymn-like, elemental” “WHAT a melody!” “Amazing liftoff into middle 8” “LIVE!!”), Give It All (“Woodpecker staccato guitar” “Vast return of drums”) and Birch Tree (“Total bliss-out, borne aloft” “Summer soul, West Coast with the roof down” “Middle 8 massed vocals, handclaps”) live. To feel the brute force of the title track (“Fucking HELL. Sonic carnage”) slap me in the face. To watch one of the best bands in the bloody world whip up a frenzy and send it hurtling towards me. At which point, I’ll give it a shake, and send it hurtling right back. For What Went Down is more than music. What Went Down is alchemy.