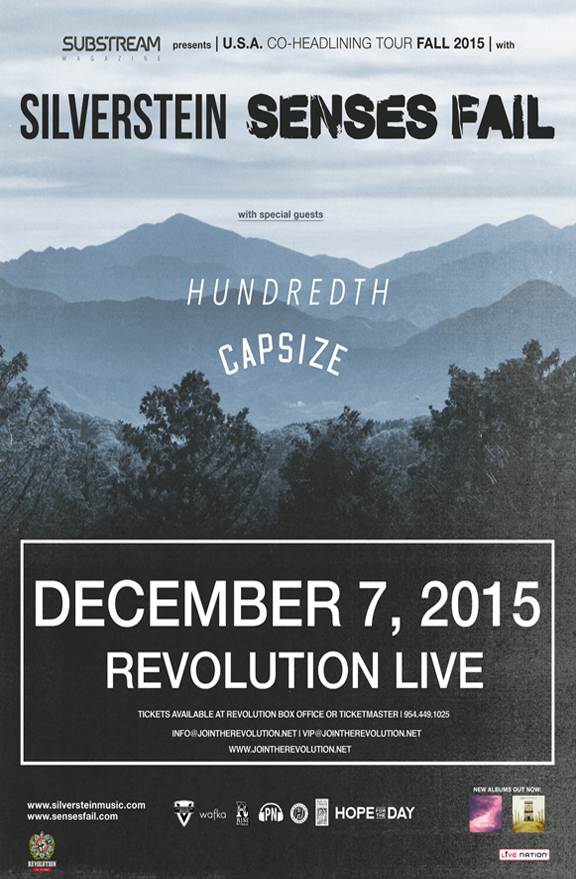 The fifteen year career of Silverstein has firmly established the group as an institution within an industry characterized by flux and mercurial vogue. Once again we are reminded that since their inception in 2000, the band’s commitment to innovation remains unfaltering.

Leading the rise of aggressive, melodic punk to the forefront of our attention, the band cultivated a sound and work ethic that has brought them from basements and community centers in Burlington, ON, to main stages, and global festivals. The success of the group’s debut full-length, When Broken Is Easily Fixed (Victory 2003), marks a paradigm of the musical American (Canadian) Dream, as the band found themselves sharing both a label and countless stages with their musical idols. The marriage of melody and aggression on this effort and others since, cemented the band within an influential position of their own.

The subsequent success of Discovering the Waterfront, and Arrivals and Departures can be credited to the aforementioned zeal for innovation, and work ethic, culminating in a 25th spot on Billboard’s top 100, a Juno nomination, and alternative music fame. A Shipwreck in the Sand, Rescue, and This is How the Wind Shifts anticipate and facilitate the latest from a group disinterested with creative complacency as Silverstein now enters yet another chapter of their decorated career. “We have gotten better as musicians and songwriters. We want to deliver better songs each time,” Paul Koehler promises. “We have so much more to offer. Our last record was our best record to date and we can do ever better this time. We’re proud of that and we’re going to work really hard to achieve it.”

The journey from Burlington to over 40 countries manifests itself in the sounds of six full-length albums, countless EPs, and singles- though perhaps never more saliently than it is heard now. Some 1,760 shows, and over one million albums sold have yet to satiate the dynamic five piece, nor their eager listeners worldwide.

Comprising vocalist James “Buddy” Nielsen, guitarists Dave Miller and Garrett Zablocki, bassist Michael Glita (former percussionist for Tokyo Rose), and drummer Dan Trapp, New Jersey outfit Senses Fail developed a slick amalgam of post-hardcore chuggery and emo heartbreak that recalled fellow New Jersey-based group Saves the Day. Formed in 2002 in Bergen County, Senses Fail quickly issued a debut EP and began gigging regularly while maintaining a thriving Internet presence. Drive-Thru Records took notice and signed the group in late 2002. A revamped version of the From the Depths of Dreams EP appeared in April 2003; it featured improved sound, one new song, and an acoustic version of the track “Ground Folds.” A tour with the Used wrapped up the year in successful fashion, while From the Depths of Dreams cracked the Billboard 200 and helped poise Senses Fail for a commercial breakthrough.

After more heavy touring and a bit of label drama, 2004’s Let It Enfold You — named after a Charles Bukowski poem — was released that September through Vagrant/Drive-Thru; a deluxe edition with bonus tracks arrived one year later. The band also contributed a cover of Suicidal Tendencies‘ “Institutionalized” for 2005’s Tony Hawk’s American Wasteland video game soundtrack. Relentless touring persisted before the bandmates began work on their sophomore effort, which saw Senses Fail hitting the studio in May 2006 with producer Brian McTernan (Thrice, Cave In) and a new guitarist, Heath Saraceno (the former Midtownmember wound up permanently replacing Miller, who’d previously left the group). A main-stage spot on the American Warped Tour helped the revised band hone its chops, as did a stint with the Taste of Chaos tour in the U.K. Both appearances led up to the release of the explosive Still Searching, which deemphasized the band’s screaming vocals in favor of an energetic, emo-tinged sound.

Bassist Mike Glita left the lineup one year later, and Hot Water Music‘s Jason Black climbed aboard as a temporary replacement during the recording of Life Is Not a Waiting Room, which arrived in October 2008. The following year, guitarist Heath Saraceno announced he was leaving the band. He was replaced by Zack Roach, and shortly afterwards the band returned to the studio. In 2010, their fourth album, The Fire, was released on Vagrant. The group’s fifth studio long-player, the well-received Renacer, was the first Senses Fail album to not feature founding memberGarrett Zablocki, and would be the last outing with longtime drummer Dan Trapp. In 2015 the band inked a deal with Pure Noise Records and released Pull the Thorns from Your Heart.