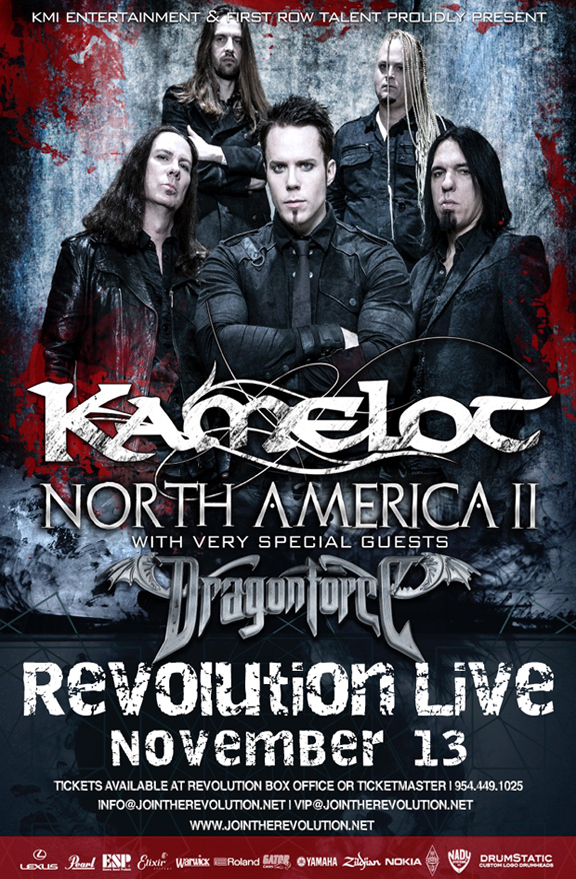 Thomas Youngblood founded KAMELOT and quickly released their debut album Eternity. The press praised the album as one of most promising debuts of all time. The successor Dominion hit the stores, with an opus that was even more diverse and varied than the debut. Later on KAMELOT’s video ‘The Haunting’ and ‘March of Mephisto’ became huge hits on YouTube and prompted the band to launch their own YouTube channel, aptly titled KamTV.  KamTV’s initial launch hurled the band into YouTube’s top 10 music channels and #1 Metal Channel, transcending all genres. With the release of The Black Halo, KAMELOT started on a headliner tour in Europe, North American, Japan and Brazil, with countless festivals around the globe.  Following the hugely successful album, KAMELOT released their first live DVD, called One Cold Winter’s Night. The DVD was heralded by the press and fans alike and set a new standard for DVDs in the genre. Subsequently, KAMELOT presented themselves more sinister and soulful but have now returned to the melodic aspects of their multi-layered sound with the album, Silverthorn.  Silverthorn went directly to the top, debuting at the #1 position on Amazon’s Heavy Metal Chart! Along with this amazing accomplishment, KAMELOT also impacted major charts in other categories including the #9 position on Billboard’s Hard Rock Chart, #24 on the Rock Charts, #79 on Billboard’s Top 200 Chart, as well as appearing on multiple international charts.

It’s astonishing to realize that DragonForce now have a history going back 15 years. But such is the pace at which music and life move these days that what was seemingly a highly promising young British metal band just yesterday are now an established full force on the scene. In fact, their reputation is such that anything new from this lot is regarded as a landmark moment in the ongoing story of metal. But DragonForce is a revelation, one that will surely prove them to reach another level of achievement. The band is full of command, energy and vitality.  They have strength in depth and breadth. Sophistication allied to an attention to detail that goes beyond what’s been done before.