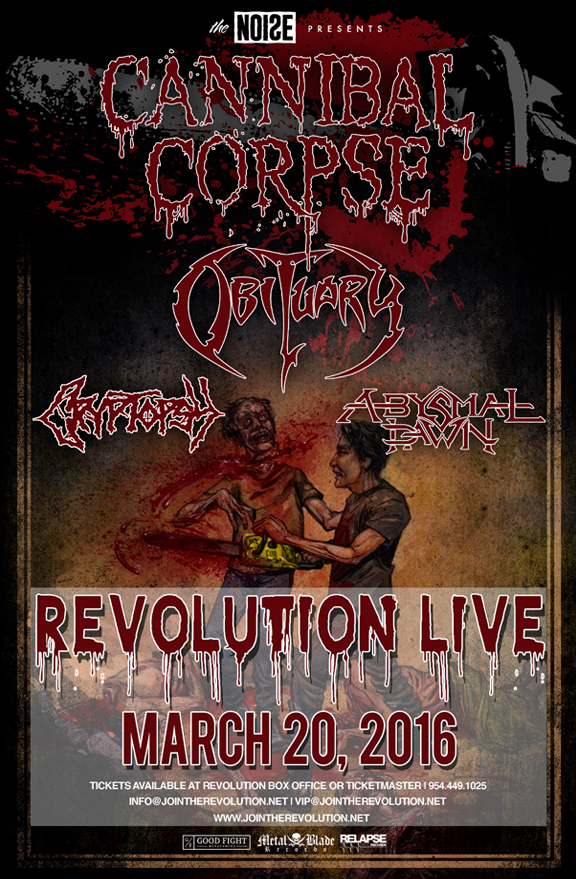 “If vomit were a movie, this would be the soundtrack,” wrote one critic of Cannibal Corpse‘s music, some of the most extreme, violent death metal sounds and subject matter ever committed to tape. Reveling in splatter-horror imagery in their often indecipherable lyrics, the group’s graphic album artwork and song titles like “Meat Hook Sodomy,” “Entrails Ripped from a Virgin’s Cunt,” “Fucked with a Knife,” and so on, have — not surprisingly — attracted a fair amount of controversy and sometimes resulted in their albums being banned. However, their over the top extremity has won them a rabid cult following and made them one of the most popular death metal bands of the ’90s; sticking with what works, the band didn’t alter or develop its style much over the decade, although fans didn’t seem to mind.

Cannibal Corpse were formed in Buffalo, New York, in 1988, their lineup composed mostly of musically active scenesters: vocalist Chris Barnes, guitarists Bob Rusay and Jack Owen, bassist Alex Webster, and drummer Paul Mazurkiewicz. Musically, they were closest to Slayer, although more extreme metal bands like Death also played a role in their sound. A 1989 demo helped the band secure a contract with Metal Blade Records, which released their debut album,Eaten Back to Life, in 1990. A cult following began to build behind the group with albums like 1991’s Butchered at Birthand 1992’s Tomb of the Mutilated. Bob Rusay was fired in 1993 and replaced with ex-Malevolent Creation guitarist Rob Barrett, who joined the group in time to appear as a club band in the Jim Carrey film Ace Ventura: Pet Detective.

Barrett debuted on record with 1994’s (relatively) more accessible The Bleeding, which proved to be Barnes‘ final album; 1996’s Vile featured ex-Monstrosity vocalist George “Corpsegrinder” Fisher. Cannibal Corpse soldiered on through the decade, returning in 1998 with Gallery of Suicide. Bloodthirst followed a year later, and in 2000 the band issued both a video and CD titled Live Cannibalism(their second concert video but first official live album). Gore Obsessed arrived in 2002, followed by the obsessively packaged box set/DVD 15 Year Killing Spree. Their ninth album of all-new material, Wretched Spawn, was released in 2004, followed by Kill in 2006. In 2008, the band went back into the studio with producer Erik Rutan (ofHate Eternal), emerging early the following year with the band’s highest-charting album, Evisceration Plague. Two years later the gore-metal masters released the live DVD Global Evisceration before returning with the all-new studio album Torture in 2012. A Skeletal Domain, the band’s 13th long-player, followed in 2014.