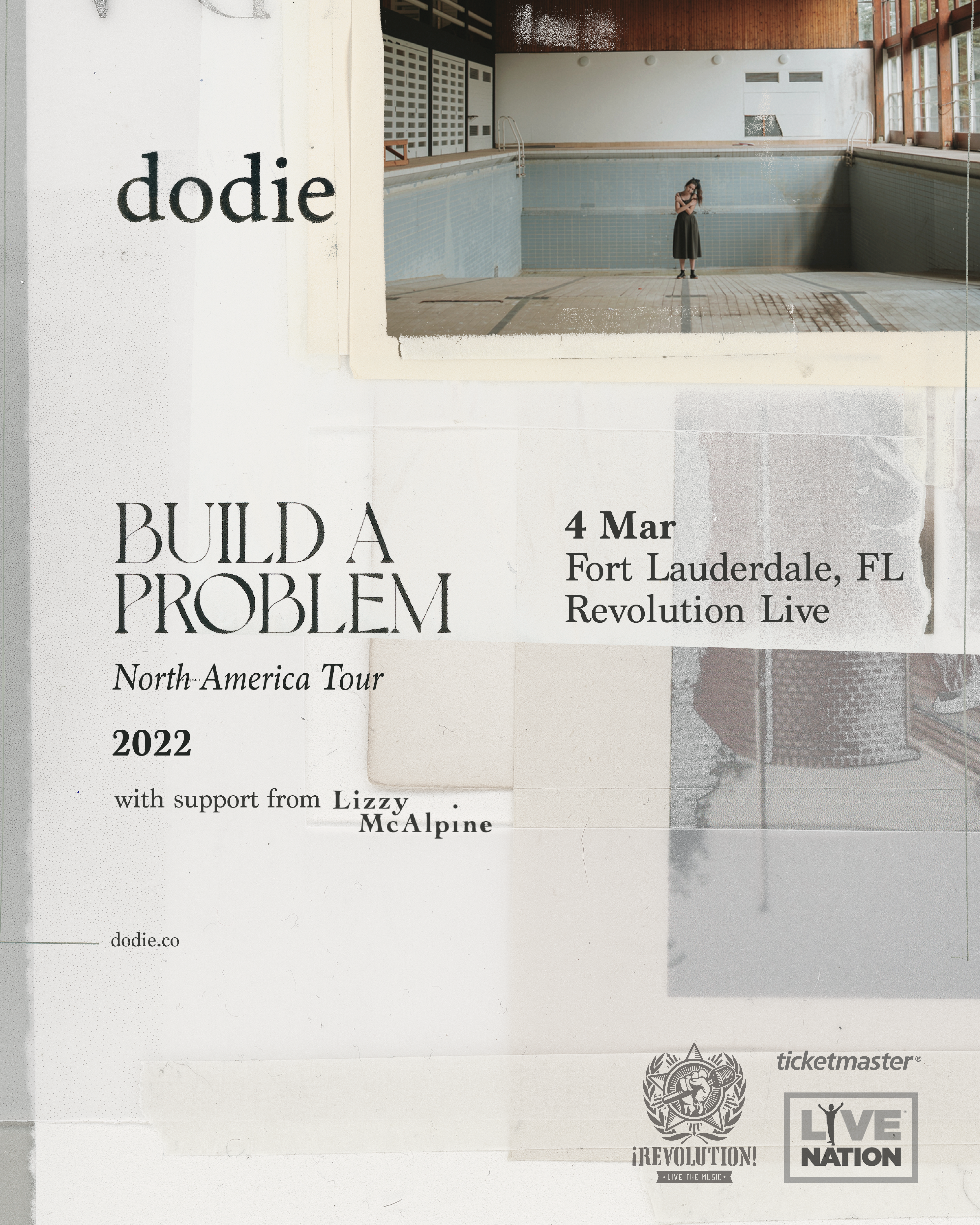 “Building a problem” is a line from a song on dodie’s second studio album. She found herself with a bit of a problem because she’d already named her previous EP Human, and the songs she found herself writing for the album really added up to the same idea; the flawed, emotionally erratic, wondrously complex conundrum that is being alive – and Human was taken. But
this line, from a song named ‘Hate Myself’, seemed to add up to a similar concept; the moments and actions in life that build within us all problems that we don’t even realize we have until we look back and go, “Ohhhh, that’s where that came from.”

dodie, whose past is still infiltrating her present and her future, explores all of this and more on her musically ambitious and dreamily intimate record named – what else? – Build A Problem. At just 25, dodie has already done a lot of living. Some of that has played out on camera as she made a name for herself as
a singer and writer online, amassing millions of fans with her disarmingly honest videos and affecting, intimate singing style. She headlined and sold out London’s Roundhouse before her first album was even out, played the Hollywood Palladium and Terminal 5 on the other side of the pond and scored two top-ten EPs. dodie doesn’t tend to rest on her laurels.
“I think for some people if you kind of boiled down an idea of me, it might be ‘just a girl with a ukelele’ which I’m really bugged by,” she says of her online beginnings. An understandable irritant when you delve into her work; on Build A Problem she has matured into an exceptional musician, using eldritch modes (for example, Lydian mode – a seven-note scale that originated in ancient Greece and underpins many Gregorian chants), writing complex string arrangements and imbuing each song with a sense of charming intimacy.

She wrote most of the songs on the album over the past two years. “I think I was going through a crisis actually,” she says now. “I was very unsure of who I was and I was trying to figure it out in music. So I think it’s quite unstable of an album – but it’s definitely honest.” Being too honest is something dodie has struggled with on social media, realising that she needed to create more boundaries between her public and private selves (“I think it’s to do with the fact I really didn’t have any boundaries growing up”) but songwriting always comes from a place of truth. “This is going to sound insanely pretentious,”
she laughs, “But with art I do believe there are no boundaries. I feel like I’m being very, very vulnerable. But hopefully, the music will protect me…”
Friends asked her, for instance, if she was sure about including the song ‘Four Tequilas Down’, a misdirectingly sweet song about an illicit, ill-advised liaison, “a mistake”, held between two instrumental tracks that were too painful even to put a name on; they are titled ? and . “I wrote question mark as an idea a while ago; I wanted to sing in a mode called Lydian, it sounds quite old, almost like a warning to me. I added more harmonies and the string tremeloes which are kind of like a rumble underneath. I wanted that song to be like, inception of an idea. An unhealthy idea.” The unhealthy idea is expounded on in Four Tequilas Down then reckoned with in . [full stop], which she describes as “a very sad sort of realisation and acceptance.”

The painful work on herself that went into the record is echoed in the often sparse, frequently painful arrangements. She found herself scoring the string parts on her laptop “on planes, in random places”, trying to get the midi playback to communicate the emotions she was feeling. When she finally heard the 13-piece string orchestra playing them in the studio she was overwhelmed by tears. “I was supposed to count them in and I just… couldn’t,” she says. It’s work she is intensely proud of but very nervous to share. “I listened to the whole album and I’m like, maybe this isn’t a great thing to share. But it’s a beautiful reflection of the dark things I feel.”

dodie has been very open about her mental health; she has suffered from depersonalisation disorder for eight years, many of which she spent desperately searching for a name for what was wrong with her. “It feels like living in a daydream,” she says. “But it’s all the time.” Though there is no real treatment for the disorder, she has found support through her charity, Unreal, and simply knowing what it is and that other people understand has helped. Managing her depression, which is triggered by the disorder, has also become more of a priority; regular therapy and writing are all part of that. “Mental health is something we all carry with us,” she reflects. Though she tries to be positive and accepting of it, the songs on Build A Problem have allowed her to work through the negative feelings that come with it too. “It’s so much healthier to be like, I accept it. Whereas I think in songs I’m sort of like opening another door in my mind and being like, this is really bad and I hate it and I hate living with it.”

In 2017, dodie came out as bisexual. She did it, of course, in song titled to dispel any ambiguity: “I’m Bisexual”. Though she was nervous of the reception a mere glance at the comments relating to the video reveal that such a public coming out helped others to do the same. “I think when I was coming out I wanted to talk about it all the time because I wasn’t allowed to,” she says looking back. “I was expecting people to look at me like, what?” But the song felt freeing. “It felt like I could talk about this taboo thing and not have any solid consequences. And it felt great! I was getting all this love and praise and it felt so good.” Like much of her reflection in the last two years, dodie is now figuring out what about her personal life can be kept a little closer to herself. But now it’s not because of shame or fear; it’s her choice. “I think sexuality can be whatever you want it to be. And for me, I think I want it to be a little more private; I’m sort of feeling the aftermath of coming out and dealing with some internalized feelings. So yeah, perhaps if someone asked me and I fancy sharing about it [I will], but mostly, I think now I’m gonna be a little bit more to myself.”

She’s also working through a lot of family issues. She talks around her upbringing, the root of her issues with boundaries and it’s clear that there are still very emotional elements that it’s hard for her to discuss. She alludes to the building of problems starting when she was very young and frank when says that mistakes were made. Her relationship with her parents is something she and they are still working on; sometimes apart, but often with her mum, together. “I’ve spoken to my mum about it a lot,” she says. “We’ve been working through it together, helping each other to process. She has gone
through her own journey of accepting and understanding who she was and who she now is. Mistakes were definitely made, and boundaries were crushed. A lot still are.” Therapy, she says, has helped (but it’s also “really fucking hard”); songwriting helps too. “A lot of them are about my parents and [me] being written wrong, and trying to navigate life with that.”

Though the themes are very heavy and the music is at times painful, Build A Problem is not a difficult album to listen to. The way that dodie crafts songs means she is meticulous about what she puts into a piece; she’s not a throw it all at the wall and see what sticks kind of songwriter. There is a vein of hope running through the record, a way of dealing with the hard emotions at play. “It sounds so lame,” she says of what she wants the album to achieve, “But what I really hope for is understanding. I would love people, whoever they are to listen to this album and be like, I get it. I relate to this.” dodie may be a work in progress; problems have been built, mistakes have been made. But with an album like Build A Problem under her belt, she’s proven that she can turn pain into art and do it with a smile.