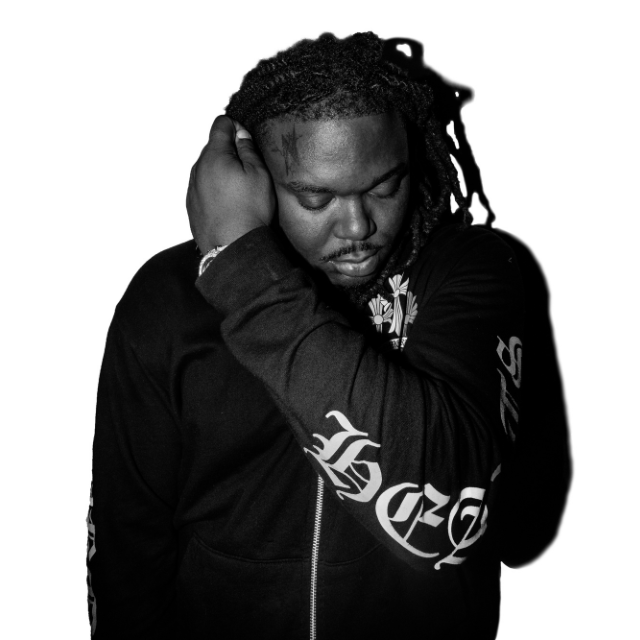 LUCKI separated himself from the pack years ago. He built a devoted fan following by creating songs packed with vulnerability and experience. His lyrics proved to be far more personal than preachy. In 2022, the same year the 26-year-old rapper released his debut album, FLAWLESS LIKE ME, the Chicago native achieved over 525 million streams (YTD) and reached #12 on the

charts. LUCKI showed growth, maturity, and perspective—without losing the soul that made him relatable. Singles “Super Urus” and “New Drank” are recent massive reminders, with over a dozen million streams apiece, that a versatile artist who had a powerful introduction during the mid-2010s is still on the ascent.

LC Camel, Jr. hails from Chicago’s storied West Side. Now a father, LUCKI has credited his parents for their dedication. In 2013, roughly a year into recording, the budding artist self-released his first mixtape Alternative Trap inspired by an array of sounds. The project arrived amid a Chicago Rap Renaissance that thoughtful and innovative young people helmed. At just 17, the rapper, then known as Lucki Eck$, captured the angst and confusion of his peer group with a streak for the wild side. The Chicago Reader credited him as the city’s “best conscious rapper” not long after. He became a sought-out collaborator across styles, working with FKA Twigs, Danny Brown, Chance The Rapper,, Playboi Carti, and Earl Sweatshirt. The project caught on, earning critical acclaim and putting LUCKI on the international map.

In the years that followed, LUCKI abbreviated his moniker and launched the Freewave EP series, a display of quantity without compromising quality. Despite the expanding catalog, in mid-2016, 20-year-old LUCKI stepped out of the spotlight for nearly a year to be a proper father and self-care. In lyrics and interviews, the artist has been transparent about bouts with depression, prescription drug addiction, and a social disconnect.

By 2017, LUCKI returned to form, releasing a slew of projects. “Sunset” reached a new peak, streaming over 20 million times, with an enchanting beat and confessional lyrics. In 2019, Lucki released Days B4 III, powered by anthems like “4 The Betta” and “Randomly.” Raps about relationships, hopelessness, and isolation resonated alongside messages from an artist who was clearly thriving on his own terms. Days B4 III was LUCKI’s first project to chart, landing him on Billboard’s top 200. In 2021, LUCKI released his collaboration project with F1LTHY titled WAKE UP LUCKI, before embarking on a headline in early 2022, selling out 20+ shows while releasing notable singles such as Super Urus, Y NOT? And more.

After tour, LUCKI upped the ante. Future and EMPIRE label-mate Babyface Ray guest on the FLAWLESS LIKE ME album that finds the 26-year-old more comfortable with himself but still admittedly growing. A leading voice in Rap, LUCKI commands the 24-track album, which he considers his debut. To support the album, which nearly entered the Top 10 on Billboard, LUCKI performed sold-out concerts in London and Toronto, as well as homecoming events in Chicago. As he prepares to celebrate a decade of originality, authenticity, and consistent growth, LUCKI has cemented an incredible legacy, even if he is still writing it in real-time. LUCKI plans on

releasing his FLAWLESS LIKE ME deluxe in Q1 of 2023, before embarking on a national headline tour & working on his sophomore studio album.