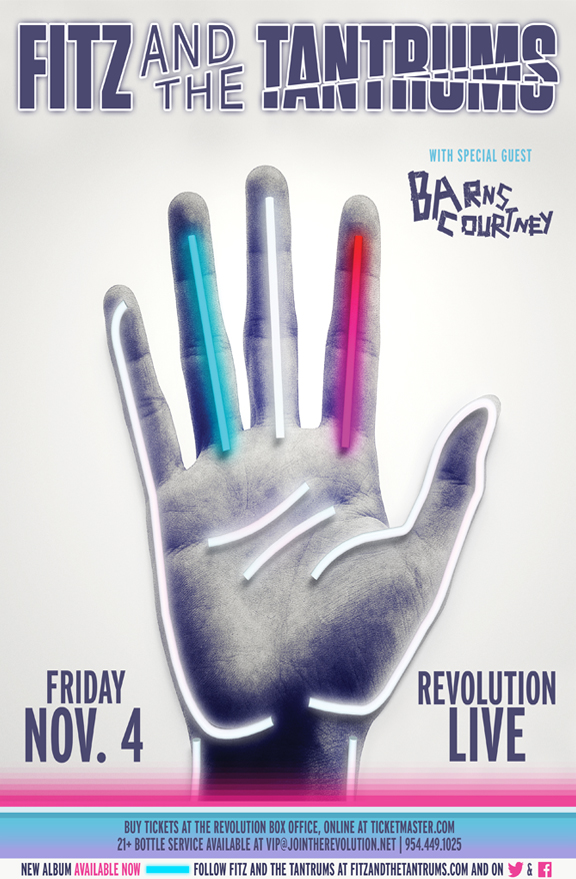 Brimming with imagination, energy, and genre-smashing scope, Fitz & The Tantrums defied the odds to become an indisputable phenomenon, a chart-topping, show-stopping modern pop combo unlike any other.  Now, with their spectacular Elektra Records debut, More Than Just A Dream, the Los Angeles-based sextet have ramped up the timeless songcraft and soul sonic force that made them a worldwide sensation to fashion a kaleidoscopic milestone that delivers on the promise of their 2010 breakthrough, Pickin’ Up The Pieces.  Songs like the impossibly catchy first single, “Out Of My League” are positively brazen with verve and vivacity, demonstrating all the drama and passion of the band’s famed live shows.  From the charged back-and-forth between co-lead vocalists Fitz and Noelle Scaggs to the incontrovertible power of The Tantrums in full flight, More Than Just A Dream is the sound of a great band taking it right to the edge.

“The only rule in making this record was that there were no rules,” says Fitz.  “Nobody was allowed to say, ‘We can’t do that.’  We didn’t limit ourselves.”

A longtime studio engineer and aspiring musician, Michael “Fitz” Fitzpatrick founded Fitz & The Tantrums in 2008, driven simply by “a need to be creative and not lose my mind over a breakup.”  He convened an “amazing set of people” – including Noelle, James King (saxophone, flute), Jeremy Ruzumna (keyboards), Joseph Karnes (bass) and John Wicks (drums, percussion) – and quickly recorded the band’s debut EP, Songs From A Breakup, Vol. 1, in his Silverlake home studio. Fitz felt so strongly about the band that he put it all on the line, investing his life savings in the project.  Belt buckles were pulled as tight as the band itself, which spent the next year captivating audiences with their outrageously entertaining live set.

“We busted our butts,” he says.  “We just kept building a name for ourselves, getting our music out there in a really old school way – playing as many shows as we could, winning over five, ten, fifty people at a time.”

It wasn’t long before Fitz & The Tantrums were being spoken of as one of the most exciting live acts in the country.  This led to the band’s 2010 signing with Fitz’s Silverlake neighbors, Dangerbird Records, a feat the singer describes as both “an accomplishment and the beginning of the hardest work we’ve ever done.”

Pickin’ Up The Pieces was released in August 2010 to unanimous critical acclaim.   Fitz & the Tantrums did anything and everything to spread the word.  Things soon began to break their way as irresistible singles like “MoneyGrabber” and “Don’t Gotta Work It Out” began drawing national radio airplay.  The next 20 months proved both exhilarating and exhaustive as Pickin’ Up The Pieces ultimately ascended to #1 on Billboard’s Heatseekers chart, and sales numbers to match.  The band embarked on an unrelenting schedule that included high profile TV performances, sold-out headline shows, and so many festival appearances that Vogue declared them to be the “Hardest Working Band” of Summer 2011.  The first time the FATT camp noticed the ball starting to hover above their palms was at Lollapalooza 2011. As the band tore through the set, the audience sang not only the radio hit “Moneygrabber,” but deeper cuts from the album—finally, this road-proved sextet had conjured the lush, holy glow all performers pine for. And judging from the smiles on both sides of the mic, it was hard to know who was being entertained more, the band or the crowd.

That sense of purpose and commitment suffused the second Fitz & The Tantrums album right from the outset.  The band wrote over 30 songs in just two months, toiling in their practice space “to the point of hallucinating.”

In May 2012, Fitz & The Tantrums arrived at Hollywood’s Sound Factory eager to grab hold of the “raw, in-your-face, non-stop energy” of their live show and put some of their spilt blood to work.  A self-proclaimed “studio nerd,” with an abiding faith in “creating mood and atmosphere through production,” Fitz considered once again producing himself, but instead opted to enlist producer Tony Hoffer, known for classic collaborations with such artists as Beck, M83, and Phoenix.

While their first record was conceived as a homage to 60’s pop soul music, More Than Just A Dream sees Fitz & The Tantrums propelling their sound towards their own distinctive, utterly contemporary vision.  Nothing was off the table as the band sought to “create these interesting hybrids of styles and influences that embrace and repel each other all at the same time,” synthesizing everything from soul to pop, from indie to electronic with a dose of hip-hop.

Songs like “Spark” and the anthemic “Break The Walls” celebrate “pushing through, personally and artistically,” while “The End” and “6AM” find Fitz continuing to grapple with questions of the heart.  To record the latter song – a much-loved staple of The Tantrums’ live set – Hoffer suggested Fitz and Scaggs sing together at the same time for the recording, much like they do on stage.  The result is a stunningly soulful dialogue that defines the two lead singers’ special chemistry.

“It was this pure moment,” Fitz says.  “We sang the song to each other, looking into each  other’s eyes, it was incredibly powerful and emotional. That’s the take that’s on the record.”

FATT’s own single-minded determination comes to the fore in “The Walker,” a dizzyingly delightful discoball inspired by the “almost mythological” Silverlake Walker, the shirtless (and now sadly deceased) neighborhood fixture known for his perpetual power-walking around the Silverlake Reservoir rain or shine, night or day.

“The song sounds happy and playful,” Fitz says, “but it’s a dark tale of obsession that is really about our own fixation with chasing our dreams and knowing there is always a price to pay, but with that said this has truly been more than we could have ever dreamed for.” Thus, the title of the record.

The album reaches a moving climax with “Merry Go Round,” a potent paean to “the loneliness and the sadness of being on the road.”  “When it came time to laying my vocals down for this song, the words held more truth for me than ever,” recalls Fitz. “I had been away for two years and came home to an empty house. I had experienced so much on the outside, but inside was still damaged.  It was hard to get through a single take without breaking down.”