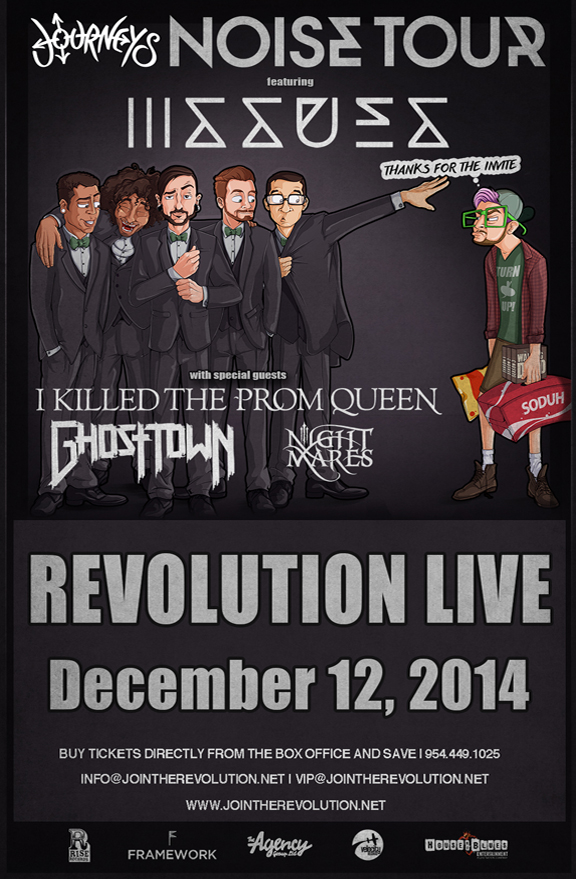 ISSUES will headline the Journeys Noise Tour with support from Ghost Town, Nightmares. The tour kicks off on Halloween in Atlanta, GA and runs through December 13.

VIP packages and pre-sale tickets are available beginning at 10am on Tuesday August 19th at www.issuesrock.com. Tickets go on sale to the public beginning Friday August 22nd at 10am.

ISSUES recently wrapped their summer long stint on the Journeys Stage on the Vans Warped Tour and are currently touring throughout Asia, Australia and New Zealand.

The band’s most recent effort, their self-titled debut LP, was released in February 2014 via Velocity/Rise Records, and landed in the Billboard Top 10 in its week of release.

Alternative Press has labeled ISSUES, “the future of metalcore…” while Substream raved, “This is the album you need to jam in 2014.” Kerrang! heralded the effort as an, “almost perfect debut from genre-less hotshots…” with Rock Sound calling it, “…an extremely important album.”

ISSUES have toured with the likes of A Day To Remember, Of Mice & Men, Pierce The Veil, Bring Me The Horizon, Memphis May Fire and Sleeping With Sirens, and are known for their genre defying hybrid of heavy rock and melodic choruses, which is fueled by dueling vocalists Tyler Carter and Michael Bohn, and the unique scratching and synths, courtesy of DJ Scout.