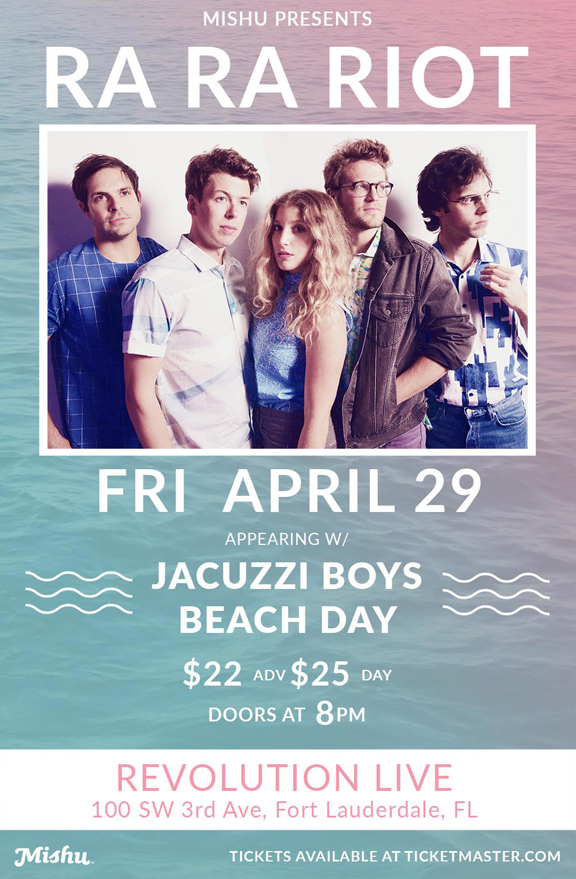 After being a band for a decade, it’s easy to get disillusioned with the tedium of adulthood, but Need Your Light, the fourth full-length from RaRa Riot, is the sound of a band being reinvigorated by their own existence. Correspondingly, the album sees the group—which originated in Syracuse but has now dispersed all over the country—getting back to their house party roots without abandoning the more heady soundscapes they explored with 2013’s Beta Love. The result is an album that’s celebratory without being saccharine, and that sees the group collectively mining their prior experiences to craft something that looks toward the future with an optimistic gaze.

The original plan was for the band—which features vocalist Wes Miles, bassist Mathieu Santos, guitarist Milo Bonacci, violinist Rebecca Zeller and drummer Kenny Bernard—to take the first extended break of their career after the year and a half they spent on the road supporting Beta Love. After a few months, however, they couldn’t help themselves from working on new music. “The inspiration came very quickly,” Miles says, explaining that he decided to fly out to Los Angeles to start fleshing out ideas with previous producer Dennis Herring (Modest Mouse, Elvis Costello). Shortly afterward, the group went on a writing trip to Milwaukee and began the process of creating what would eventually become Need Your Light. To fully realize their vision, RaRaRiot ended up working with a host of previous collaborators, including Ryan Hadlock (who produced 2008’s debut The Rhumb Line); longtime friend and sound engineer Andrew Maury (who co-produced 2010’s The Orchard); and Vampire Weekend producer Rostam (who is also half of the avant garde R&B duo Discovery alongside Miles).

In fact, Rostam and Miles’ approach to that liberating project—which released its debut LPin 2009—helped influence the end result ofNeed Your Light as well. “In January of this year, Wes came to stay with me on the West Coast for five days, and we set out to write songs not knowing where it would take us,” Rostam explains. “There was something I’d heard in Wes’ singing in the earliest days ofRaRa Riot that I felt had never been captured on record.” Influenced by their shared love of U2’s Achtung Baby, the pair spent five days writing the songs “Water” and “I Need Your Light”. “The attitude of these two songs was only able to come because of over ten years of collaboration,” Miles adds. “These two songs were written with no expectations, and wequickly realized that we wanted them to be played live.” So the duo took another week to record bass, drums, guitar and violin in Los Angeles with the full band.

“Working with people we had a history with was comfortable in the sense that it enabled us to continue growing and focus more on the music than relationships,” Santos adds. “ We already trusted everyone.” Additionally, the group collaborated with previous drummer Gabriel Duquette on the track “Bouncy Castle,” and with longtime friend Maury on“ Absolutely,” “ Call Me Out,” and “ Bad Times,”— further expanding the reoccurring theme onNeed Your Light of a band incorporating their past into the future.

Listening to Need Your Light, it’s quickly apparent that the heightened level of experimentation and expansive soundscapes wouldn’t have been possible without the band’s synth-heavy approach to 2013’s Beta Love. This is clearly evident in the opening track “Water,” which starts off with a syncopated groove and minimalist instrumentation before gradually building into a triumphant, 90’s soul call to arms. Alternately, “Bouncy Castle” resides on the opposite side of the sonic-spectrum with its carefree neo-soul refrain. Yet both of the songs were created with the group’s incendiary live performances in mind. “We wanted to make sure all of the songs on this album could be reproduced live because performing has always been our greatest strength and something we felt we got away from with our last record,” Miles says. “A lot of these songs incorporate the same instrumentation we’ve used in the past, but the vibe is somewhere we haven’t gone before, which is exciting.”

Lyrically, Need Your Light parallels the transitional nature of the members’ lives as they enter their thirties and begin leaving Brooklyn to start families without abandoning the band that they’ve spent their lives cultivating. “It’s more of a grown-up record, but with our still invariably raucous attitude,” Miles explains, adding that this evolution was entirely organic. In other words, the aforementioned “ Bouncy Castle” may revolve around an adolescent’s first erection, but it’s not merely an attempt at humor. “On this album we talk about serious things in kind of a funny context, but it’s presented very earnestly,” Santos says. “We really tried to have that type of balance and dichotomy on all of these songs.”

From the carefree, orchestrally tinged vibe of “Absolutely” to the shimmering falsetto pop of “Instant Breakup,” Need Your Light sees the band mining their career to come up with songs that transcend categorization. This ability to get back in touch with their roots was only encouraged by their decision todo a short tour of warehouses and basements late last year before they reentered the studio. The experience reminded them of why they began RaRa Riot in the first place. “Because we started as a house party band, we never wanted to lose sight of having fun and engaging with the audience through visceral live shows,” Santos says.

n the past RaRa Riot have latched onto cerebral concepts like the Singularity or futurism, but with this album they cast a wider net, focusing on everything from sexual relationships to the Challenger explosion. “ It was fun to write songs about Internet affairs and retain a kind of tech-aspect, but it’s much more understated,” Miles explains. The stories are conveyed in such a way that it leaves the listener the chance to attach a more personal meaning to each of the 10 tracks. Whether Miles is singing about something fantastic or mundane, there’s an enduring energy to the songs onNeed Your Light, which illustrates that in many ways, RaRa Riot are still only getting started.