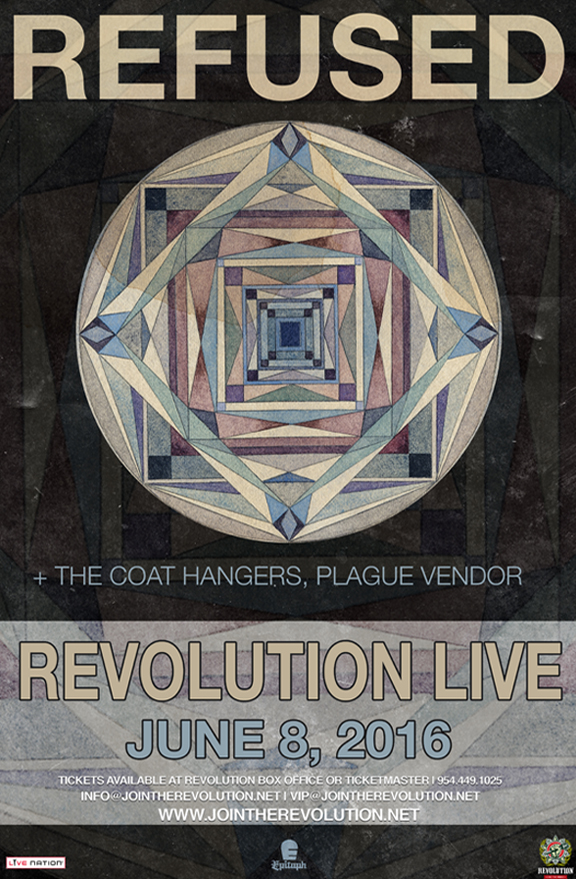 Swedish rock band Refused wasn’t just ruminating about the lasting impact of popular culture when it began its 1998 album The Shape Of Punk To Come with a lyric about classics never going out of style — it was also taking stock of its own turbulent existence, which met an ignominious end later that year in front of 50 kids at a basement show in a Virginia college town. Indeed, Refused came and went before the true power of its music could be understood, even by its own members. And in the ensuing years, the band cast a giant shadow over the world of underground rock, with the boundary-exploding Shape rising to all-time legendary status as it influenced a new generation of musical revolutionaries.

After Refused, frontman Dennis Lyxzen, drummer David Sandstrom, guitarist Kristofer Steen and bassist Magnus Flagge started anew in a host of different bands — sometimes in various combinations of playing together, sometimes making music they didn’t intend anyone else to hear. All the while, “Refused was this weird albatross,” says Lyxzen. “I could play a great show and walk out into the crowd afterward, and someone would come up and say, ‘I love Refused.’ For a long time, playing together again wasn’t even on the table.”

An offer to reunite for the 2012 Coachella Valley Music & Arts Festival in the California desert spurred the band back into action, and the triumphant tour that followed found Refused playing to heretofore inconceivably massive crowds around the world. Initially reluctant, Lyxzen says “I thought it’d be Coachella and nine more shows. That’d be it. Then we started practicing, and we wound up doing 82 shows. Now we’re back with a new record, so it must have felt right.”

Freedom explodes out of the speakers with opening track “Elektra,” as Lyxzen’s throat-shredding declaration that “nothing has changed” catapults Refused into the 21st century. The group started contemplating new Refused music within the first four months of the reunion tour, a process greatly aided by the fact that Sandstrom, Steen and Flagge had already been writing together informally for several years under the auspices of a new, vocal-less band.

Steen recalls, “I said to David, ‘Why are we pursuing this experimental project that has a lot of overlap with Refused? Why don’t we turn these into Refused songs instead?’ And he was like, ‘Yeah! That’s what I think too!’” Adds Sandstrom, “When Dennis wasn’t involved, the music was a lot more dense and dynamic, with a lot of stuff going on. When we started thinking we were writing for Dennis, we made decisions that suited him and created room for him.”

“Elektra,” “366” and “Destroy The Man” existed in primordial form before the reunion, and constituted the first batch of material the non-singing members presented to Lyxzen. The earliest full-band new song was “Thought Is Blood,” which Steen and Sandstrom demoed during a soundcheck in Toronto. “That came together pretty quickly, because we weren’t writing strange instrumental music. We were actually writing it for the band,” Sandstrom says. “When you choose to walk away from something that is good or that people like, you can worry that maybe it was just a lucky strike. People were approaching us saying, ‘You’re not making new music, are you?’ Like it wasn’t our prerogative if that’s what we felt like doing. Nobody wanted us to fuck with the image of the band who makes a great album and splits up. Nobody wanted us to dilute it. That actually provoked us.”

If Shape blasted apart the constraints of the punk and hardcore worlds with which Refused had long been associated, Freedom goes a step further by incorporating the wide-ranging influences that have shaped band members’ personal tastes. Production was overseen by Nick Launay (Gang Of Four, Public Image Ltd., Nick Cave, Arcade Fire), of whom Sandstrom says, “He was like the weird genius older brother that you finally got some alone time with.” In addition, “Elektra” and “366” were produced and co-written by fellow Swede and longtime Refused fan Shellback, who has scored eight No. 1 hits on the Billboard Hot 100 with artists such as Taylor Swift and Pink.

With its four-to-the-floor drumbeat and vibrant horn section, the groovy “War On The Palaces” evokes forebears like the Rolling Stones and the MC5 while also sounding nothing like the Refused of old. Says Sandstrom, “We talked about how horns can be violent and cool and heavy, and then suddenly we had this riff and we thought, ‘We should put horns on this.’” Elsewhere, a pitch-modulated spoken-word intro, acoustic guitar warfare, drum machine beats and vintage keyboard accents bring Kanye West to mind on “Old Friends / New War,” while “Servants Of Death” tips a cap to ‘80s-era Prince and Michael Jackson’s “Off The Wall” with its blend of heavy riffs and funky propulsion.

“On some of the songs we thought, ‘Can we really do this? Is it too much funk? Too much rock’n’roll?’ It’s enjoyable to balance on that thin edge,” says Flagge. “We’re after that element of danger. We could have played it safe and made songs based on hardcore tradition, but none of us were interested in doing that.” Adds Lyxzen, “In all honesty, if we’d have had the financial means and the know-how, we would have tried even dumber shit 20 years ago. We went into this record with a very, very open mind and the notion that anything was possible. There was no blueprint for how we wanted it to sound.”

That approach also held true when it came to writing lyrics. “Our earlier records were full-on anarchist jargon,” Lyxzen says. This time, he and Sandstrom — still two “self-taught punks with crazy ideas” — holed themselves up in a Stockholm hotel room for three days “talking about politics, existential issues and what we wanted to present as a band in 2015. We talked about the political situation in Europe, capitalism and how it affects people. These discussions turned into songs.”

On the punishing “Dawkins’ Christ,” Refused tackles provocative subjects rarely addressed in current music, like the secularization of modern society and the conundrum of science versus faith as advanced by the titular biologist. “Modern secular society is bankrupt when it comes to the spirit,” says Sandstrom. “If you don’t subscribe to any of the established religions and you still feel the need for community or direction, you’re sort of fucked, to put it bluntly.”

Album closer “Useless Europeans” marries an unsettling instrumental backdrop to “images and glimpses we got of an empire that has fallen,” says Sandstrom. “It grew out of this idea that any era will have a period before it officially ends, when people don’t know it has actually ended. You’re just living in it and not being a productive member of a forward-moving culture.”

For the members of Refused, the impending release of Freedom and its accompanying tour have returned them firmly to the present tense. Says Steen, “I could not have imagined this would have happened. I’d have said it was impossible, and never in a million years would I do it. It was just something about the fact that Refused grew so much while we didn’t exist.” “It’s not a reunion anymore,” Lyxzen insists. “This is one of the most radical things we’ve ever done, both musically and lyrically.”