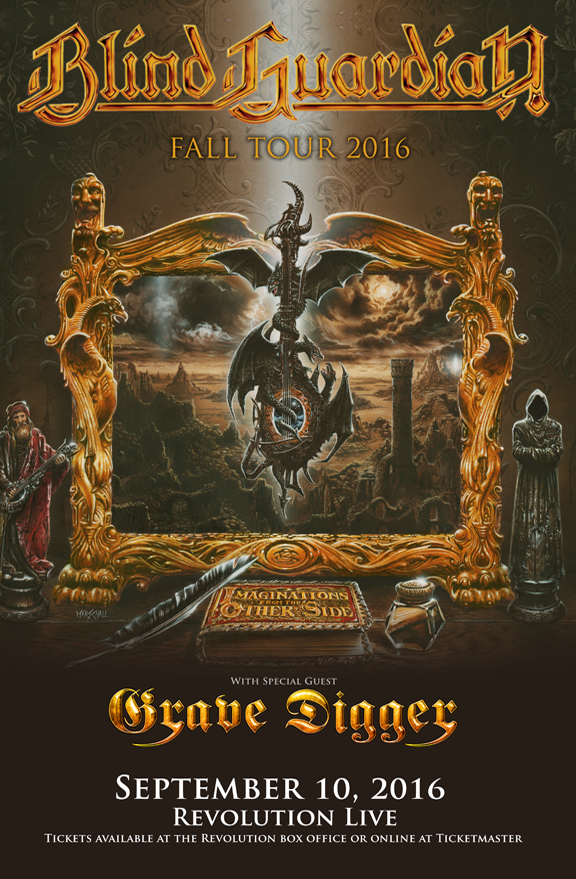 Even before the dawn of our space age, humanity had the audacity to conceive of ourselves as a life form not bound to the planet that birthed us. More than anything, leaving terra firma required all of our amassed knowledge, talent, and imagination. Such is the case with BLIND GUARDIAN, a band from Krefeld, Germany that refuses to be bound to the genre of music that spawned them and whose accumulated knowledge, talent, and imagination have created portals into senses beyond the five we experience in common, ordinary life.

With that background established, prepare yourself for a trip that will overwhelm all your known senses and reveal something truly extraordinary.

Greatly inspired by life experience, world myths, legends, and their own fervent creativity, metal’s most epic storytellers BLIND GUARDIAN continually aspire to define themselves on a whole new level. With their highly‐anticipated, orchestral tenth studio album »Beyond The Red Mirror«, they have successfully captured the scope of their essence with unprecedented accuracy.

By far, the most important fact about the new album is this: there are no compromises.  Not one.

This is not a typical soundtrack or musical or rock opera. It is, simply, typical BLIND GUARDIAN. Set for release in early 2015, »Beyond The Red Mirror« has raised the bar on the gold standard trajectory the band had set themselves on when they first formed. Contemplating the band’s extremely successful thirty‐year career when asked to describe

the band’s guiding principles for the creation of this new release, BLIND GUARDIAN guitarist

André Olbrich shares: “We want to surprise and impress with our music. Nowadays, music tends to be arbitrary and predictable. But we want to keep developing our music.” This strategy has been followed to the letter and there will be nothing comparable to this anywhere in the panorama of music until BLIND GUARDIAN decides to record again.

It’s been over four‐and‐a‐half years since the release of 2010’s world‐renowned »At The Edge Of Time« album (which debuted at #2 on the German album charts and at #1 on the American Billboard Heatseekers chart & #108 on the American Billboard Top 200 Albums chart).  In October of 2012, the band settled into Twilight Hall Studios in Grefrath, Germany with producer Charlie Bauerfeind (SAXON, HAMMERFALL, HELLOWEEN) to begin recording

»Beyond The Red Mirror«. For the next two years, the band worked relentlessly at infusing their inimitable, emotion‐rich music with classical orchestrations within and throughout.

“Seeing how orchestra songs come alive is a very special and intense moment for us,” confesses BLIND GUARDIAN vocalist & lyricist Hansi Kürsch. “Thanks to ‘Sacred Worlds” and

‘Wheel Of Time’ [from 2010’s »At The Edge Of Time« album], I can say that we have learned a lot about scoring, recording, and mixing when it comes to such music. You will notice a great improvement when you listen to the final result of this adventurous trip we have started so long ago.”

Working with three different classical choirs – one from Prague (the Czech Republic), one from Budapest (Hungary), and one from Boston (United States) – plus two grand orchestras featuring 90 musicians each, the brilliant, cumulative talents captured on »Beyond The Red Mirror« have generated absolutely spellbinding results that ‐ at key moments ‐ mimic the feeling of flying, making this new album everything BLIND GUARDIAN fans have been hoping for.

Gracing the cover and pages of this musical masterpiece is artwork by long‐time collaborator Felipe Machado. “I have never worked with an artist who is so much into things and who is so quick on the uptake at the same time,” Hansi reveals. “He truly is a magician. Whenever I throw in a few mumbling words, he comes back with art. It is amazing.”

These ten new tracks will transport the listeners ‐ via a mysteriously powerful red mirror ‐ into an otherworldly dimension that includes tyrants, gods, and the Holy Grail. And it’s no coincidence that »Beyond The Red Mirror« bears strong lyrical ties to 1995’s »Imaginations From The Other Side«, for we are reunited with the young protagonist we first met twenty years ago in the songs ‘Bright Eyes’ and ‘And The Story Ends’ who stood before a magic door, unsure whether to make the leap into a new, unknown world or to stay in his own. Now an adult, the impact of this important moment in the protagonist’s life is the launching point for the entire album.

Opening with a surging tidal wave of emotion created by a spine‐tingling choir and a full orchestra is »Beyond The Red Mirror«’s first gem, the nine‐and‐a‐half  minute ‘Ninth Wave, a consciousness‐expanding palette of landscapes and moods bearing the message of an urgent mission still desperately searching for a resolution.

“A story between science fiction and fantasy,” explains Hansi. “The story begins with our 1995 album, »Imaginations From The Other Side«. The two worlds described therein have changed dramatically for the worse since then. While there used to be several passages between the worlds, there is only one gate left now: The Red Mirror. It has to be found at any cost.”

An endeavour demanding that attention  be paid to the lyrics as much as to the music, what follows is a desperate search for truth, an exploration of the relativities of good and evil, the consequences of lost opportunities, a glimpse into a distant universe’s dystopian society, a prophecy, a promise of revolution, a plot for revenge, and a miracle machine with powers far beyond what mere mortals could have dreamed possible.

Closing with an explosion of heroic harmonies & choral glories with a second nine‐and‐a‐half minute, self‐contained saga named ‘Grand Parade’ (cited as “the best song we have ever written” by Olbrich), BLIND GUARDIAN’s grandiose, uplifting, and ingenious storytelling is guaranteed to leave you breathless.

With »Beyond The Red Mirror«, you will experience why BLIND GUARDIAN is so undeniably influential and absolutely without equal in the pantheon of heavy metal music.