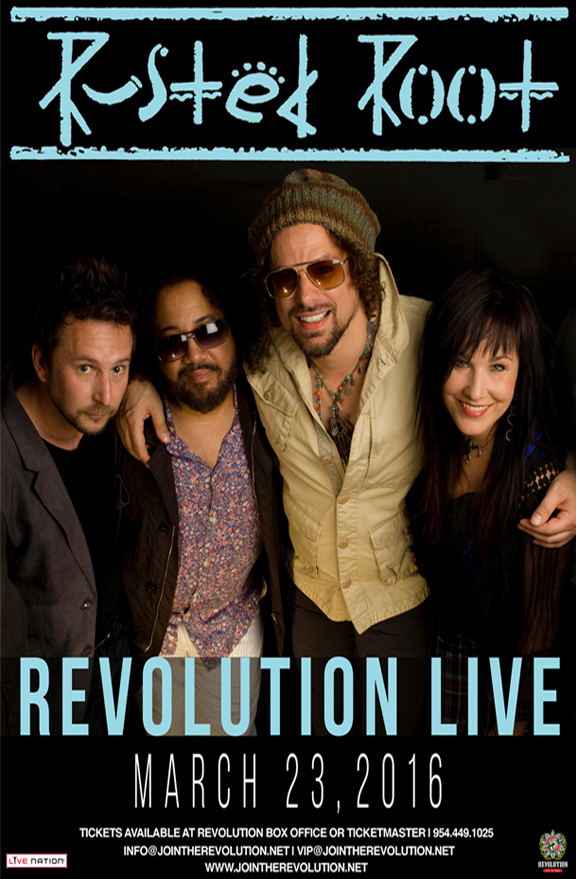 “The Movement, means a new work ethic to me – it’s going from the industrial age to the individual spiritual age. I feel everyone should devote all their actions to all that is love, healing and pragmatic. We’re seeing the growing pains of this right now…the world is split…some people are fearful and fighting it with all their might… Rusted Root is trying to help with this…this is our movement!!” shares Rusted Root founder, front man, songwriter, singer/guitarist Michael Glabicki. Having collaborated with one another for two decades, Rusted Root, has honed the perfect combination of musical intuition, freedom and virtuosity, which has allowed them to organically shape shift their music into their own distinct and undeniable vision. With eight albums under their belt, over three million records sold worldwide and countless nights on the road, Rusted Root, transcends age, generations, cultures and musical styles. Their music has been featured in films likeIce Age, Twister and Matilda, TV shows like New Girl, Ally McBeal, Charmed and Chuck as well as recent Enterprise Rent-A-Car commercials. Bassist and vocalist Patrick Norman says, “From the very first time we played music together, I knew we had something special. The music and the enjoyment of creating and playing with one another I feel is the driving force behind this band.” The powerhouse ensemble’s sweat-inducing and hypnotic live performances have allowed them to tour alongside everyone from Santana, Dave Matthews Band, The Allman Brothers Band, Robert Plant and Jimmy Page’s reunion tour and countless others.  Rusted Root’s Shanachie debut, The Movement (10/30/12), is an energized and poetic collection of originals that capture the Pittsburgh based unit at their best. Glabicki says, ” The Movement is an extremely joyous recording with seriously deep undertones. It is a culmination of everything we have learned, or have tried to learn, over our entire career. It truly is a career record for us.”

The Movement is a tribute to Rusted Root’s fans. “The title itself is a testament to the community surrounding our music,” says vocalist and percussionist Liz Berlin.  Rusted Root created the “Fortunate Freaks Unite! We Are Rusted Root” campaign, a fan-funding campaign where fans contributed to the making of the album, while receiving some cool opportunities with the band. Glabicki adds, “Rusted Root is a state of mind shared and explored by many people- we are a community that supports one another.”
The Movement transports listeners though an array of emotional and musical terrain, creating one seamless journey. “There is real space on this album, you can hear the room, us breathing, laughing, playing music together,” says Liz. The pulsating, cathartic and uninhibited “Monkey Pants” opens the CD. “I have these little dance moves I do on stage every night,” confesses Liz. “I almost feel like a monkey puppet on a string when we play this song, it’s like the groove pulls my body in very specific ways.” Glabicki adds, “The song embraces our unique human animal- focusing on our ability to spiritualize, sexualize, and dream our own existence.” The album continues to entice with “Cover Me Up,” which begins and ends with gorgeous guitar and percussion interplay and an enchanting Calypso and African vibe. Glabicki shares, “The guitar work on this song is really extraordinary, Colter Harper’s parts are beautifully layered with mine, his many trips to Africa really show through on this song.”  Glabicki’s and Liz’s vocals tease and slither through the melody as the band crescendos to a bluesy showdown.

The camaraderie, sheer love for musical experimentation and a desire to break down musical boundaries comes full circle on “The Movement,” the title track and first single. “Our drummer, Preach Freedom came up with such an interesting drum pattern for the song and along with the tambourines, foot stomps and claps, it’s like nothing I’ve ever heard before,” exclaims Glabicki.  “It was really great having Lucy Stone singing background vocals with us on this one.  She came up with a couple harmony ideas that I worked off of to create the vocal arrangement for the song, it feels like exciting new territory for us.”

Another highlight on The Movement is the rhythmically charged and scintillating “In Our Sun.”  The trance-like rhythmic patterns and Sub-Saharan drenched chanting reach a fevered pitch and then fade like a mirage.

Liz explains that the members of Rusted Root are drawn to and have explored virtually every form of music. “I am very inspired vocally by anything from Indian to African to Middle Eastern sounds and scales having grown up with a lot of Hebrew music” she says. Michael Glabicki’s cites the Bee Gees, Elvis Costello, Neil Young, Tony Childs, Black Keys, Black Sabbath and various Afro Pop music as among his influences.  Glabicki explains the song “In Our Sun” started out as an experiment and was created with several great Pittsburgh drummers. He was playing around with the song and started listening to it backwards; that’s where the fun began. “There’s an acoustic guitar that was used solely to record the drums through its magnetic pick up which caused the strings to ring out creating a drone effect which decided the key for the song. Since most of the vocals were then recorded on the tour bus you can hear the bus humming and rattling throughout the song too.” Glabicki’s vocals shine on the lilting ballad “Fossil Man,” and on “Fortunate Freaks” Rusted Root lets it all go and rocks out hard with the song’s energizing bridge. “Sun And Magic” showcases dazzling guitar and bass lines that shimmer like a summer breeze. Glabicki’s signature Tremelo picking and acoustic-electric guitar amplification shine throughout The Movement.  Rusted Root gets down right gritty on  “Up And All Around” while “Something’s On My Mind” continues to solidify their place as one of the most versatile and innovative bands on the creative music scene.
“I was in my first semester of college. I had just returned from a trip to the war torn country of Nicaragua and had come back very depressed. It was the physical type of depression where at times I couldn’t move my arms…I remember after one of those spells I picked up the guitar and wrote a song,” recalls Glabicki. “I can remember feeling like I had lifted out of my dead body and I could move so freely. Shortly after that night I dropped out of college to start a band – my first real band – Rusted Root.” It was the early 90s and it wasn’t long before Rusted Root garnered a rabid fan base with their unique blend of roots music and world rock. Although they have toured the world, the city of Pittsburgh still pulses through their veins. Patrick explains, “Living in our hometown helps keep us grounded and focused.” Liz adds, “Pittsburgh means so much to us as a band. The city, the people, the community are the womb where Rusted Root gestated, birthed and has thrived all these years. It is the home we can always come back to.”  Glabicki adds, “Pittsburgh is home. It’s family. It is our protection. It’s the perfect place to create something original. Pittsburgh is full of working class hero’s.”  In 1992 Rusted Root released Cruel Sun independently and two years later, while signed to Mercury, they released their platinum-selling breakthrough, When I Woke, which spawned the Top 40 hit “Send Me On My Way,” that went on to chart on Billboard’s Hot 100. In 2004, the band released the double album Rusted Root Live on their own Touchy Pegg label, following the re-release of the newly re-mastered Cruel Sun in 2003. Rusted Root continued to tour relentlessly between the release of Cruel Sun and the 2009 release of Stereo Rodeo.

Now with the release of The Movement, the journey continues. Liz says, “When we first got together as a band there was a groundswell of community, love and support that has taken us on a movement through our lives and together as a band.  This movement has never stopped all these years!”  Glabicki concludes, “I hope this music will help to lighten people’s load and elevate them!! Making this record was a lot more intense than any of our other recordings. It was the first time that I produced and engineered a Rusted Root recording.  It kind of upped the ante for me, there was no way I could step on eggshells and not be brutally honest, it was do or die. We were blessed to work with some really great musicians and singers. It was also awesome having some of the Fortunate Freaks supporters visit the studio to get us out of any routine we might have been in.  Our goal is to create a ritual with the fans, something that is truly healing.”