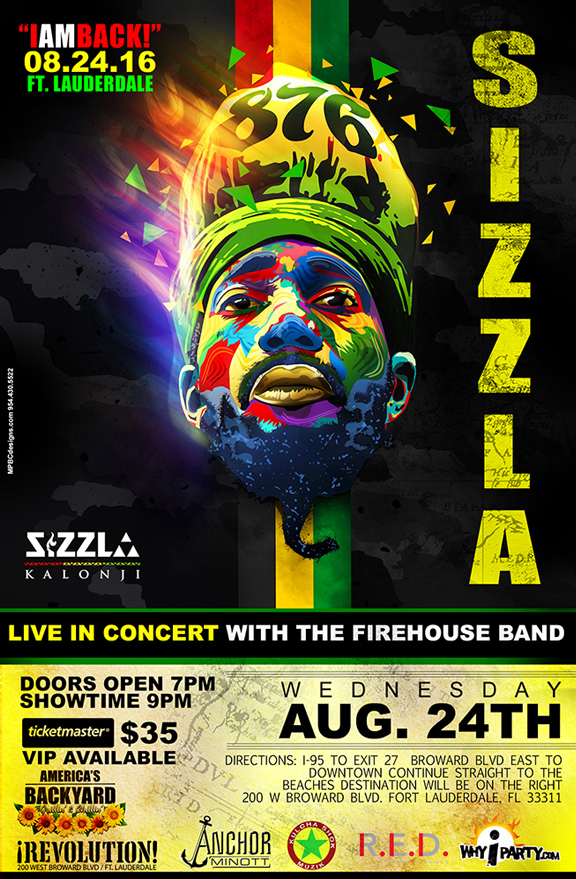 Emerging during the latter half of the ’90s, the enormously prolific Sizzla was one of the leaders of the conscious dancehall movement. Along with Buju Banton and Capleton, he helped lead dancehall back to the musical and spiritual influence of roots reggae, favoring organic productions and heavily Rastafarian subject matter. A member of the militant Bobo Ashanti sect, he sometimes courted controversy with his strict adherence to their views, particularly his aggressive condemnations of homosexuals and white Western oppressors. Yet overall, his music was generally positive, advocating faith and compassion for poor black youth, and respect for women. He remained something of an enigma to the public at large, rarely granting interviews and keeping his concert appearances to a minimum. Nonetheless, he still ranked as arguably the most popular conscious reggae artist of his time, thanks to a normally high standard of quality control — all the more impressive given the frequency with which he recorded. A versatile singjay-style vocalist with a gruff, gravelly tone, he was capable of both rapid-fire chatting and powerful, melodic singing, and his best backing riddims were among the strongest in contemporary dancehall.

Sizzla was born Miguel Collins on April 17, 1976 and was raised in the August Town area of Kingston of devout Rastafarian parents. After honing his vocal skills, he landed a gig with the Caveman Hi-Fi sound system, where he first made a name for himself as a performer. He cut his first single for the small Zagalou label in 1995, and soon moved on to Bobby “Digital” Dixon’s Digital B imprint. However, he didn’t manage a break-out success until saxophonist Dean Fraser recommended him to producer Philip “Fatis” Burrell. Sizzla released a series of singles on Burrell’s Xterminator label, including “Judgement Morning,” “Life’s Road,” “Blaspheme,” “We Uh Fear,” “I’m Not Sure,” and the Shadowman duet “The Gun.” His first LP, Burning Up, appeared on Xterminator later in 1995, and he toured extensively alongside Luciano and Mikey General. Unlike kindred spirits Capleton and Buju Banton, Sizzla’s early material was culturally oriented right from the start; he was able to build an audience without any of the lyrical slackness that helped establish the other two.

Creatively speaking, Sizzla really came into his own with the release of his second album, the Burrell-produced Praise Ye Jah in 1997. Widely considered one of the top conscious dancehall albums of its time, Praise Ye Jah was quickly trumped by the release of the Dixon-produced Black Woman & Child that same year. The title track was a smash hit and became something of a cultural reggae anthem. Sizzla scored several more hits during 1997, including “Like Mountain,” “Babylon Cowboy,” “Kings of the Earth,” and the Luciano duet “Build a Better World.” This hot streak kicked off an enormously productive recording binge that lasted over the next several years, with much of his output still done for Burrell.

1998’s Kalonji was issued in the U.S. under the title Freedom Cry, and featured the successful singles “Love Amongst My Brethren” and “Rain Shower.” No less than three albums — Be I Strong, Good Ways, and Royal Son of Ethiopia — appeared in 1999, with Be I Strong achieving the highest profile among them. 2000 brought three more albums: the double-CD Liberate Yourself (which featured one disc of Sizzla material and another of his protégés), Words of Truth (which featured a bonus live disc), and Bobo Ashanti, a well-received, highly spiritual set with a stronger hip-hop flavor. Refusing to slow down, Sizzla issued four more albums in 2001 — Black History, Taking Over, Rastafari Teach I Everything, and Blaze Up the Chalwa — and often displayed a harder edge and a willingness to embrace digital production. That approach changed in 2002, when he concentrated on softer, mellower, more romantic material, which dominated that year’s albums: Ghetto Revolution and Da Real Thing. Two more albums, Light of My World and Rise to the Occasion, appeared in 2003. Soul Deep was released in 2005, with both Ain’t Gonna See Us Fall and Waterhouse Redemption landing a year later. By the end of 2006, Sizzla released the high-profile The Overstanding, an album with hip-hop impresario Damon Dash as executive producer. I-Space returned the singer to his Jamaican roots in mid-2007. Welcome to the Good Life followed in 2011. A trip to Africa influenced two of his 2012 albums with The Chant focusing on his visit to Zimbabwe while In Gambia was partially recorded in its namesake country. His 2013 effort The Messiah was recorded with the Bread Back production team and marked his 70th album. The 2014 set Radical rounded up lost tracks recorded for the Xterminator label between 1992 and 2003