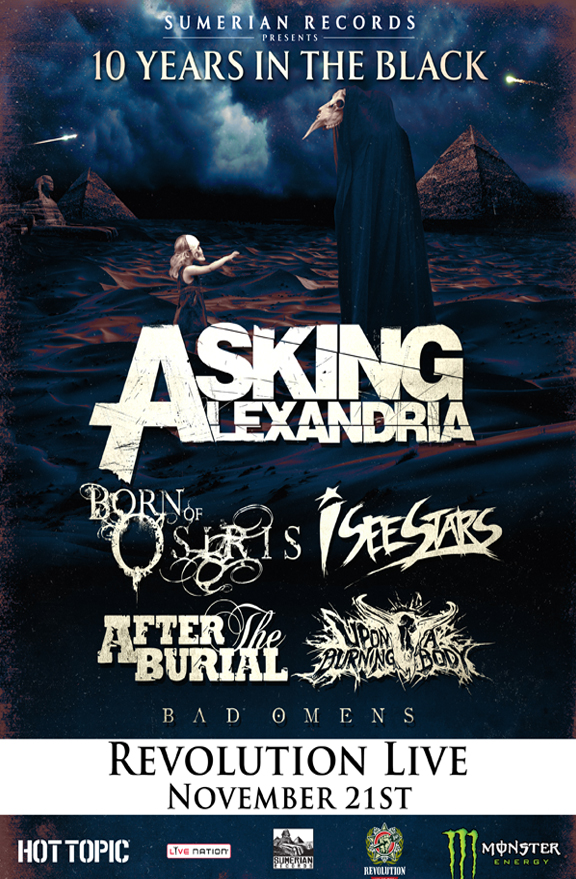 Spanning two continents, three names, and nearly a dozen members, Asking Alexandria are a band whose short career seems to be more about change than anything else. The brainchild of guitarist Ben Bruce, the band was originally formed in Dubai in 2003 under the name Amongst Us, which soon changed to End of Reason before eventually settling on Asking Alexandria in 2006. They cemented the name change with their self-released EP, Tomorrow.Hope.Goodbye. The following year they released their first full-length album, The Irony of Your Perfection, through Hangmans Joke. Shortly afterwards, Bruce left Dubai and returned to England, resulting in the dissolution of the band. In 2008, he formed a new band around the name Asking Alexandria. Unlike its vaguely post-hardcore predecessor, this incarnation was a pretty standard screamo/metalcore act, with chugging guitars and alternating singing/screaming vocals. Finally settling on the lineup of Danny Worsnop (vocals), Camron Liddell (guitar), James Cassells (drums), and Sam Bettley (bass), the band set to work on a touring blitz of the United States with bands like Alesana, the Bled, and Evergreen Terrace. In 2009, they signed with Sumerian Records and released their first album with the new lineup, Stand Up and Scream, in the fall of that year. They followed their debut with the Life Gone Wild EP, which included remixes of songs from Stand Up and Scream and a few Skid Row covers. The band would find mainstream success in 2011 with the release of remix album Stepped Up and Scratched, which featured EDM remixes of songs from their debut as well as their sophomore album, Reckless & Relentless, which was released a few months later. Reckless peaked at number nine on the Billboard charts and the band continued with relentless touring into the next year. At the end of 2012, Worsnop tore a vocal cord, an injury which would prove consequential years later. The band returned in the summer of 2013 with a more mature hard rock sound, smoothing off some of the metalcore and electronicore influences, resulting in their more focused third album, From Death to Destiny. At the end of the tour cycle, in January 2015, Worsnop announced he was parting ways with the band to focus on a more traditional rock & roll sound with his group We Are Harlot. Asking Alexandria recruited a new singer, Ukrainian metalcore vocalist Denis Stoff (Make Me Famous), and immediately released the new lineup’s first single, “I Won’t Give In.” That song would appear on their album The Black, which was released a year later in March 2016.