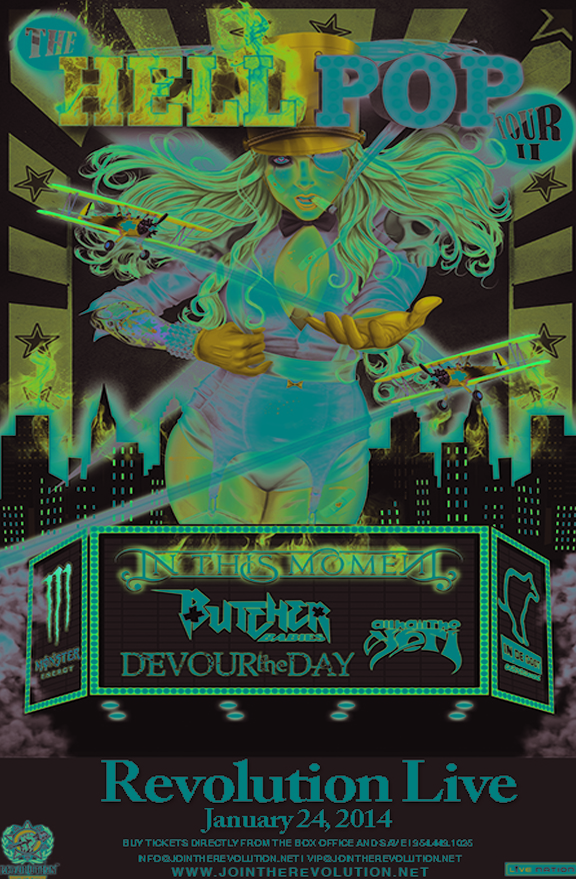 Change. Some people welcome it. Others resist it. Some seek it out. Others fear the unknown. Sometimes it happens beyond our control. Whatever one’s mindset, change is inevitable. The challenge comes with how we face it and deal with the consequences.

For vocalist Maria Brink and guitarist Chris Howorth, the duo at the heart of In This Moment, change came unexpectedly when they found themselves rebuilding the walls around their foundation. Stripped down to their essence, the core of In This Moment is on fire with their fourth album, aptly titledBlood.

“I knew that I wanted this album to bring out elements we’ve never shown before. This alluring, darker, sinful side of us that no one has ever seen,” says Brink. “We wanted to find something new within ourselves, and with this album, I’m definitely the boldest I’ve ever been. I’m not trying to push boundaries. It’s not a conscious thing. It’s a natural artistic place.”

Brink and Howorth began tracking Blood with producer Kevin Churko late last year at The Hideout Studio in Las Vegas, their 3rd with Churko at the helm. “In January [2012], we began writing and recording more songs,” says Howorth. “Kevin put no limits or restrictions on us. There was no setting the clock this time. He just wanted us to record until the songs were the best they could be.”

The powerful title track, “Blood,” was the first one written for the album and it’s one of Howorth’s favorites. “It really set the tone for the whole record and kicked a bunch of doors down,” he says. “I think it’s a really unique song that doesn’t sound like anything I’ve heard before, and I’m really proud of that. My other fave is “Hello.” I like it because it’s so heavy and melodic at the same time. Crushing riffs and huge choruses never get old to me. This song is In This Moment 101. Our fans will love it.”

In This Moment began in Los Angeles in 2005, when Brink and Howorth met at an open jam. Their debut album, Beautiful Tragedy, landed the band on the 2007 and 2008 editions of Ozzfest. Their first collaboration with Kevin Churko came with the release of 2008’s The Dream – earning them a slot on the 2009 Warped Tour.  Their third album, A Star-Crossed Wasteland (2010) was their highest-charting album.

Time on the road was both educational and inspirational in the making of Blood, says Brink. “Watching all those bands helped me let go of my fear, following my art and not worrying about ‘Is this too much?’ or ‘Am I pushing too far?’ or ‘Are people going to judge me?’ I’m going to do what I do in my moment to create, and people are either going to love it or not. There will always be people who don’t get it. You’ve got to do it for yourself and create your own path. This album is the most fearless I’ve ever felt making music.”

Working as a duo to write and record the new album brought Brink and Howorth even closer. “Maria and I are amazing friends and business partners,” says Howorth. “We created this band, we trust each other and we’re like family. We’re very protective about In This Moment. It’s very sacred. The trials and tribulations made us more resolved to make things happen.”

With the release of Blood, In This Moment is geared for the next level — as musicians, songwriters and performers. “I want the band to become widespread,” says Brink, “and that doesn’t mean selling out. If you change who you are to become part of another world, then your art is cut short and you jeopardize what you believe in. We’re not doing that. Our music is for us first, we write it for us, we’re doing our own special thing that you can only identify with us. We can do that and still be connected, still love the underground world, and tap into new crowds and people who can understand  the music. We love what we’re doing and are ready to have more people know about us.”