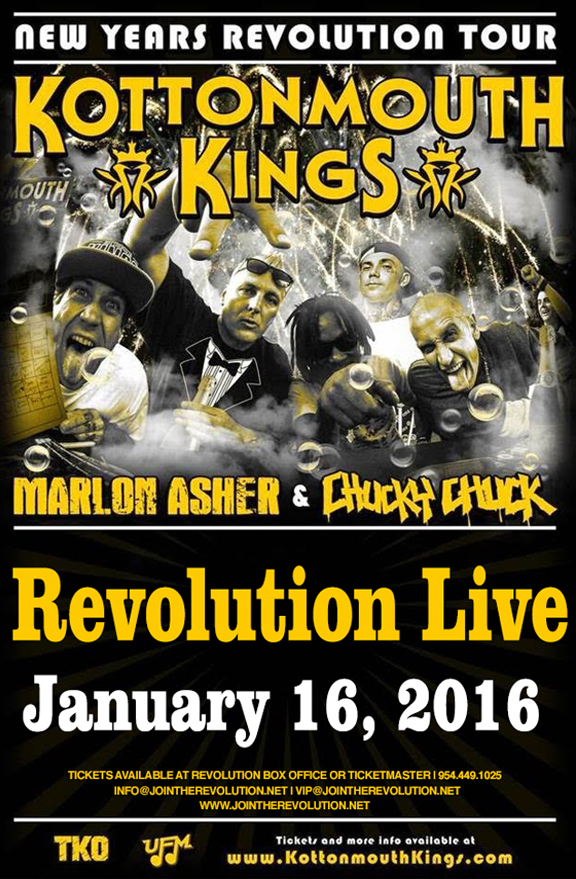 Self-described “psychedelic hip-hop punk rock” outfit the Kottonmouth Kings emerged from Orange County, California, in 1994. Comprised of former Humble Gods frontman Brad Daddy X, rappers Saint Vicious and D-Loc, DJ Bobby B, and “visual assassin” Pakelika, the group first attracted attention with the track “Suburban Life,” which appeared on the soundtrack to the film Scream 2 and became a modern rock radio hit. After issuing an EP, Stoners Reeking Havoc, on their own Suburban Noize label in early 1998, the Kottonmouth Kings released the full-length Royal Highness on Capitol that summer. Hidden Stash followed a year later, and their third album, High Society, pushed them into the mainstream. Gigs with D12 and Bionic Jive followed in fall 2001, just prior to the release of Hidden Stash, Vol. 2 : Kream of the Krop. A fifth studio album, Rollin’ Stoned, which was produced by Brad X, appeared in October 2002.
The self-explanatory Classic Hits Live hit the streets in 2003 while the band continued its expansion of the Suburban Noize empire, putting out DVDs and CDs by rappers and punk bands. Their 2004 release, Fire It Up, came out on the stoner’s holiday, 4/20. The Kings returned in 2005 with their seventh album, a self-titled effort that featured guest shots from like-minded pals like Cypress Hill and Tech Nine. Unfortunately, the combo was forced to postpone its summer tour when D-Loc sustained a foot injury. Koast II Koast became the band’s eighth studio full-length in June of 2006. The compilation Hidden Stash III appeared at the end of the year, with a new album, Cloud Nine, arriving in 2007. Like the Kings’ 2004 album Fire It Up, 2010 album Long Live the Kings was also released on the stoner’s holiday of 4/20. Sunrise Sessions would follow a year later, featuring more of a reggae and jam band vibe, while 2012’s Mile High returned to the world of rap-rock, while reuniting the group with founding member Saint Dog. In 2015, the Kings climbed into the Top Ten of Billboard’s Rap Albums chart with Krown Power, an album that featured the Insane Clown Posse along with reggae legend Marlon Asher.