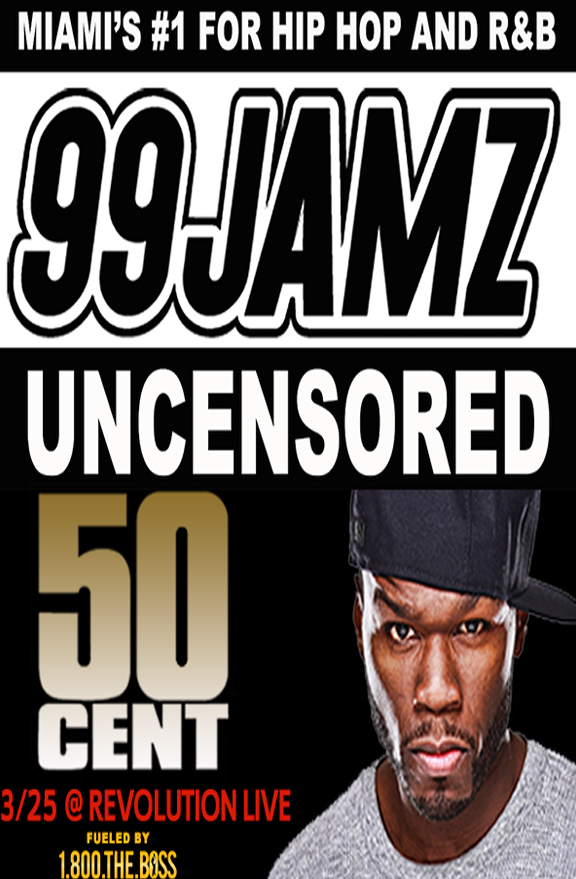 50 Cent was one of the biggest stars hip-hop produced in the 2000s, a muscled and menacing, yet imperturbably cool presence with a near-mythic backstory. The protégé of Dr. Dre and Eminem, 50 Cent made music that was both gangsta and good fun. His 2003 debut, the nine-times-platinum Get Rich or Die Tryin’, made him a star. Though his popularity diminished somewhat by the end of decade, 50 Cent’s bank account didn’t suffer since he also spent the 2000s establishing himself as a hip-hop entrepreneur.

He was born Curtis Jackson in Queens, NY, on July 6, 1975, and was raised by his single mother, a crack dealer, until she was murdered when he was eight. Living with his grandparents, 50 Cent competed as an amateur boxer but soon became a crack dealer himself. Jackson was arrested while in 10th grade, but by eighteen, he was making $5,000 a day selling crack and heroin.

50 Cent began rapping in high scool. In 1996, a friend introduced him to Run-D.M.C.’s Jam Master Jay, who was starting a record label, JMJ Records. Jay produced an album for 50, though it went unreleased. 50 later recorded an album for Columbia Records in 2000, Power of the Dollar. (The label declined to release that one, too, though it’s been heavily bootlegged.)

In April of that year, 50 Cent was shot nine times outside his grandmother’s home; in a 2003 cover story for Rolling Strone, Touré chronicled the aftermath of the shooting: “[50] spent thirteen days in the hospital, then staggered out on a walker. Six weeks later, he began walking on his own. Now life was more precious to him. He began working on his body with endless push-ups, pull-ups and sit-ups that turned him from kinda fat to chiseled. But more important for an MC, there was now a large, squarish hole through the left side of his lower jaw and a piece of bullet left in his tongue. He’d lost a bottom tooth and a U-shaped chunk of his gums, but his lazy tongue and the hole in his jaw gave him a slur like no one in hip-hop. ‘There’s a different sound now when I talk, ’cause of the air around the tooth,’ 50 says. ‘Gettin’ shot just totally fixed my instrument.'”

50 set about releasing a cavalcade of menacing, diss-heavy mixtapes — No Mercy, No Fear, recorded with his G-Unit crew in 2002, is one of the best. 50 soon caught the attention of Eminem, who touted 50 as “the illest motherfucker in the world.” Along with partner Dr. Dre, Eminem signed 50 to Shady Records and Aftermath Entertainment. While gearing up for his debut, 50 released Guess Who’s Back?, a commercially available collection of his early work that finds a middle ground between the off-the-cuff rhymes of his mixtapes and the more polished assault of his official studio albums.

Get Rich or Die Tryin’ had a boatload of advance buzz; a feud with rapper Ja Rule also helped 50 increase his profile. Nobody seemed surprised when became a blockbuster. “Wanksta,” one of Jam Master Jay’s last productions, and the Dre-produced party anthem “In Da Club” tore up the pop charts, and the album was full of slick, powerful hooks—the half-sung, half-shouted chants of “Life’s on the Line,” the slick steel drum on “P.I.M.P.” 50 gets stoned, gets laid and fires off gunshots like it’s nothing, all the while employing a steady, laid-back cadence.

After conquering the world, 50 became a business, scoring his own G-Unit clothing line, his own PlayStation game, a semi-biographical movie (also called Get Rich or Die Tryin’), and even his own Vitamin Water flavor. His record label, G-Unit, released a stream of high-profile, no-bullshit gangsta rap from The Game, and a handful of releases from his G-Unit stable. On Forbes magazine’s 2007 list of “Hip Hop Cash Kings,” 50, worth $32 million, ranked second behind Jay-Z.

But while 50’s profile remained high, his modus operandi of “get even richer or die trying” had a deleterious affect on his music. On The Massacre, 50 leaned on his “cuddly thug” persona, serenely seething about cocaine coming out of his pores but also luring girls into the “Candy Shop,” crooning to strippers on “Disco Inferno” or getting downright goofy with Eminem on “Gatman And Robbin’.” The album debuted at Number One

By 2007’s Curtis, 50’s appeal had slipped. The album was released the same day as Kanye West’s Graduation, and SoundScan showed that rap fans in 2007 were definitely more eager to lap up West’s self-introspection than 50’s circa-2003 bullets-and-braggadocio. 2009’s Before I Self Destruct should have been received as 50’s triumphant comeback record — but this no-fanfare, all-meat-no-gristle record didn’t receive nearly as much buzz as past 50 albums.