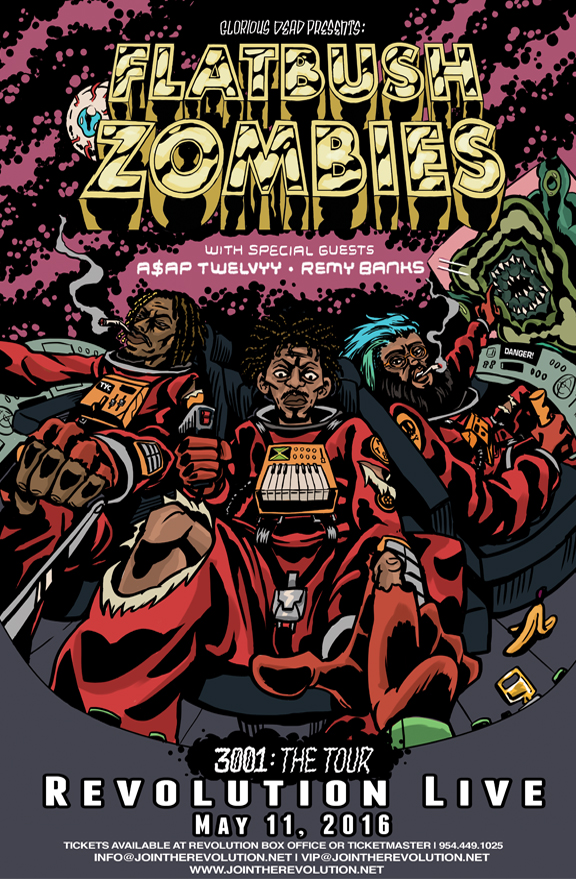 The Brooklyn crew comprised of Meechy Darko, Zombie Juice, and Erick Arc Elliott made their Internet debut as Flatbush Zombies with a video that celebrated two of their favorite things: weed and waffles. The duo flashed gold fangs at the camera, smoked L’s like its legal, and ate waffles next to Sour Diesel nuggets.

Next came a viral spark that got the attention of hip-hop blogs and a few major labels, but it didn’t stop there. After a string of trippy videos for “S.C.O.S.A.”and “Face-Off (L.S. Darko),” Flatbush Zombies released their first full-length mixtape,D.R.U.G.S., last week. From Kilo Kish’s magnetic appearance on “JupiterSound” to the syrupy, smoked-out “Laker Paper,” D.R.U.G.S. is every bit a strange smoker’s album as it is an introduction to the left-field collective.

On the heels of spitting fiery verses on A$AP Mob’s “Bath Salt,” we decided it was time to find out Who Is Flatbush Zombies? During a visit to the Zombie Palace, the crew kept the weed in heavy rotation while they played quick rounds of NBA 2K12. As expected, rap talk was plentiful, but the conversation also drifted to the meaning of “zombie,” movie influences, “Thug Waffle” hate, and why they can’t stop wearing Supreme. Continue reading for a look at it all and a better understanding of who these rising rappers really are.