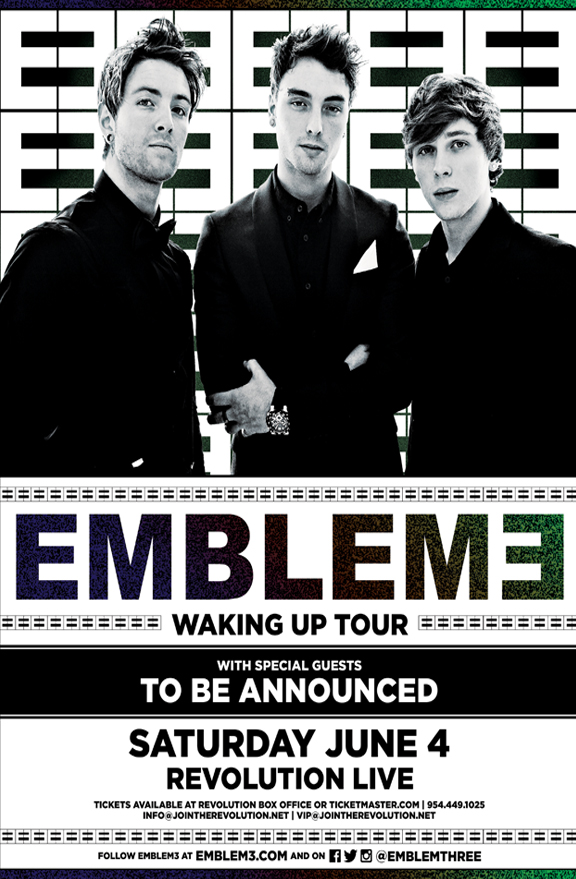 This was the question written in black marker on the whiteboard brothers Keaton and Wesley Stromberg kept in their Huntington Beach crash pad. This whiteboard had served as an artistic nerve center for the trio, on which they had plotted out songs, set goals and wrote mantras of inspiration. They were brainstorming for a new band name, and the word “Emblem” immediately struck the trio as something classic and symbolic, eternal. They had cycled through almost dozens of names in their time together; as Emblem3, they knew they had something definitive.Barely into their teens music took precedent over everything else and the brothers, Wesley and Keaton, left home for California in pursuit of their dreams.They were playing to intense and adoring crowds all over the Sunset Strip, and had won the top prize in Rock N’ Road’s Orange County Battle of the Bands. But the ambitious group, looked at a blank white board and their dwindling bank accounts, knowing they needed a bigger break. They were given one with an audition for “X Factor,” where they wowed Simon Cowell with their original performance of “Sunset Blvd.” — no easy feat.But as Emblem3 progressed through the show’s process, they once again sensed that they were being misunderstood and molded — as young men who could easily be seen in teen magazines, Emblem3 could easily feel the push for them to be seen as a “boy band.” Their unwillingness to compromise may have cost them in the short term; they failed to make the finals of “X Factor.” But having amassed 20 million YouTube views and an international fanbase, they were clearly the show’s breakout band. Winners of the 2014 Teen Choice Awards “Breakout Group” alongside a Top 20 single and over 400,000 concert tickets sold worldwide, Wesley and Keaton are just getting started.It’s fitting: nothing’s ever been planned for Emblem3, and things always seem to take an unusual curve. But it always ends up in the right place.