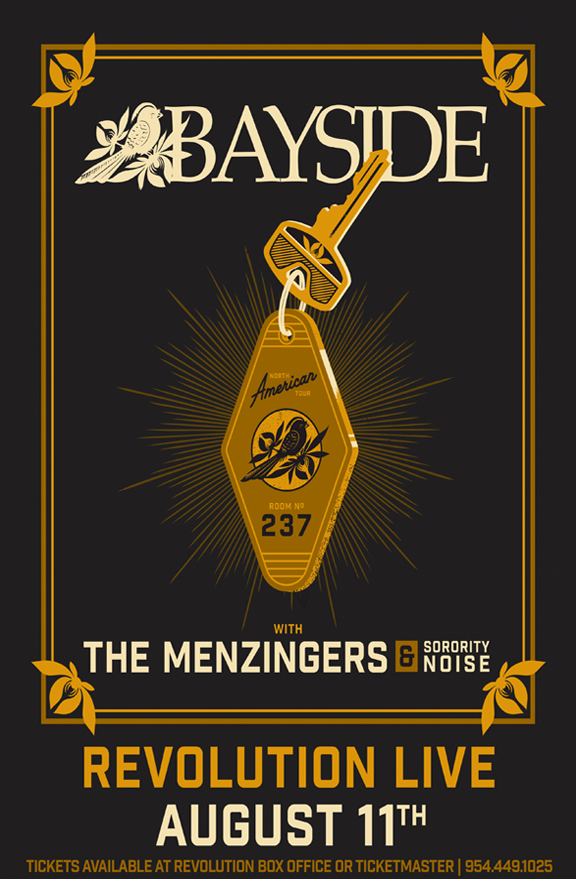 Bayside fans don’t call their relationship with the band a “Cult” for nothing. After a string of much-adored releases, Bayside has one of the most dedicated fan bases in rock, and the group steadfastly rewards those devotees with the musical salvation they seek. Six albums and more than a decade later, Bayside has never lost touch with that mission and, in fact, they’ve only grown bigger. While veteran bands take breaks and regroup, Bayside haven’t taken that route and instead, soldiered on, building up and growing more and more into themselves… to the point in which they are the most “Bayside” that they have ever been. The fact that their audience has grown is testament to that.

Now continuing that legacy is the band’s latest creation, an explosive 11-track collection that captures Bayside in prime form, combining classic elements from throughout their career. Guaranteed to rock the faithful, the new release is appropriately entitled Cult.

“When we were done with the record we were like, ‘This is every Bayside record,’” explains singer/guitarist Anthony Raneri. “It has the honesty and rawness that we’ve had since Sirens And Condolences, and those risks: those weird key and time signature changes, and the different styles of music we explore. The Bayside ‘Cult’ is something our fans have been talking about for a long time, and it seemed like a good name for a greatest hits album, which is kind of what this is: a Bayside discography. On the cover, there are even little symbols to signify each album.”

That’s a lot of history for an album cover. The band—which also includes lead guitarist Jack O’Shea, bassist Nick Ghanbarian and drummer Chris Guglielmo—formed in the winter of 2000 in Queens, NY, undergoing numerous lineup changes in the early years. At first through Raneri’s sheer persistence and dedication Bayside progressed, eventually cutting two embryonic EPs with Dying Wish Records. Those efforts bore fruit, leading to a contract with Victory Records in 2003, resulting in the band’s 2004 full-length debut, Sirens & Condolences. But it was just the beginning, and the group released three more quintessential LPs with Victory, cementing their place as one of the most important bands in the modern underground music scene—Self-Titled (2005), The Walking Wounded (2007) and Shudder (2008)—then briefly moved on to Wind-Up Records in 2010 for Killing Time (2011), their most widely visible album to date. After that record cycle Bayside opened another exciting new chapter in their career, signing with punk powerhouse Hopeless Records in 2013. Cult marks the band’s first Hopeless release.

“Shep was very instrumental in teaching me about songwriting. He taught me a lot about drawing a listener in and getting inside the mind of the listener, and not just sitting down with a guitar and playing whatever comes to mind,” says Raneri. “He’s sort of my mentor as far as songwriting goes. I loved working with Gil Norton on the last record [Killing Time]—he’s a legend, and it was an amazing process—but with this record, I really wanted to get back and hone in, try to get better at my songwriting again. I knew that working with Shep has always done that for me.”

Sonically, Cult is perhaps the band’s most confident and resonant work to date, featuring turbocharged rhythms and the consistently blistering guitar work of six-string whiz O’Shea. But as much as the album is a return to the band’s musical sweet spot, on the other hand Cult’s lyrical content breaks new thematic ground, showcasing Raneri’s ongoing personal growth as both the man and the songwriter. Instead of dwelling on past romantic failings, this time the lyricist points his pen at the hard matters of life and death, having recently lost his grandfather, stepfather and stepbrother.

“[Cult] is pretty different because it’s not about broken relationships as much as other records; on a personal level, my relationship has been great, my marriage is good and I’ve started a family. Instead a lot of this record deals with mortality, without it being morbid,” says Raneri. “I lost a lot of people who were close to me, and it really just started making me think a lot about what my legacy was going to be. What am I going to leave behind and what is my entire generation going to leave behind? What are they going to be saying at funerals 40 years from now? It’s wondering if life is about leaving a legacy. Is that what we’re all here for: living a life worth remembering?”

Raneri channels these universal existential questions into personal inspiration on tracks like first single “Time Has Come,” which finds the singer challenging himself to rise to the occasion over intricately interwoven guitar lines. “It’s meant to be more of an uplifting thing,” says Raneri. “If I want to make something of myself, build a legacy, accomplish something, then I’ve got to just go do it. The time is now to do something if you ever plan on it.”

Other tracks like “Stuttering” and “Bear With Me” put the music business under the microscope, as well as Bayside’s place within it. “[“Bear”] has a lot to do with my career and my legacy as a musician. You look at bands like mine, and it’s hard to ignore that a lot of pop-punk or mid-2000s emo bands just sort of disappeared,” says Raneri, who’s instead had the good fortune of seeing Bayside’s popularity continually grow. “Fortunately for us our band has been able to make it through a lot of that. There are definitely days when I feel like I’m a novelty, but like the line in the song, I think I’m twice the man I used to be.”

Even when Raneri does return to issues of the heart, he does so with a newfound perspective. A prime example is the song “Transitive Property,” which Raneri wrote during Warped Tour 2012 for his girlfriend—now his wife—as a heartfelt apology, as the couple was on the verge of a breakup. Although never intended for public ears, when bandmates heard the song they insisted it be included on the new album.

“That’s the most personal song I’ve ever written. It’s like sharing a letter to the world; sharing my actual diary that I didn’t think anybody would see,” Raneri says. “I always write a song with the intention of sharing it, but that lyrically was the first song I wrote that was so personal because I thought nobody would ever hear it. I think it’s a great song; one of the best songs I ever wrote.”

Bayside has already toured the world many times over, sharing stages with a virtual “who’s who” of like-minded artists and enjoying regular main-stage spots at major festivals like Warped Tour, but the band’s plans for the coming year are no less ambitious. After Cult drops in February, Bayside will head out on a U.S. headlining tour, then travel to Europe with Alkaline Trio in the spring. From there Bayside will likely play still more high-profile North American dates during the summer of 2014.

“I’m excited about the tour, because it’s sort of a combination of underplayed and big shows,” says Raneri. “We’re in certain cities playing bigger venues than we’ve ever played, and in some cities we’re playing in smaller venues.”

Now six full-lengths into their career, making the setlist each night gets tougher than ever. Raneri says the band is cautious of including too much new material live, for risking of disappointing fans awaiting the classics, but once listeners have Cult in their hands it’ll be easier to gauge which new tracks to perform. Inevitably though, Cult will stand up well next to past material. If there’s one thing immediately clear, it’s that Cult is as classic Bayside as it comes.

“We don’t play anything we don’t want, but at the same time, we listen to our fans, and we know what makes Bayside, Bayside. We try to grab all those things that we all love about Bayside and try to do more of them,” says Raneri. “People’s lives change. You go from high school to college to adulthood to parenthood, and everything in your life changes, except there’s always going to be a new Bayside record, and you can always go home.”