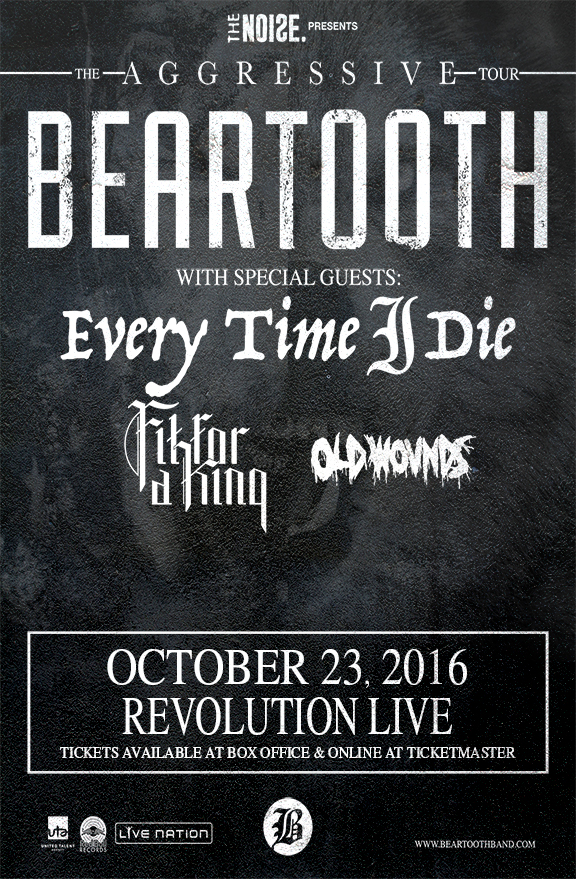 In the two short years since their debut album was cooked up in front man Caleb Shomo’s basement, BEARTOOTH has catapulted into heavy music’s stratosphere. “The Lines,” “Beaten in Lips,” “In Between,” and “Body Bag” collected over 10 million views on YouTube, as BEARTOOTH trekked around the globe with Slipknot, Pierce The Veil, Bring Me The Horizon, Sleeping With Sirens, Reading & Leeds, Download Festival and the Vans Warped Tour.

BEARTOOTH has as much in common with stomping metalcore as old-school punk, vintage screamo, and harder edged pop punk, with a bit of cinematic extravagance.

Whereas Disgusting was the sound of a man pushing forward, Aggressive is a battle cry vowing to never retreat back into the dark. BEARTOOTH’s second Red Bull Records full length arrives filled with unapologetic power and focused determination. It’s the inevitable result of a fiercely dedicated, immensely talented, often troubled young singer who found purpose in sharing his insecurity, hostility, and regret with likeminded people the world over, people he never dreamt would hear his music let alone connect with it.

“’Crazy’ doesn’t even begin to describe it,” Shomo says of the BEARTOOTH journey. “It’s been the biggest whirlwind of unexpected things happening over and over.”

The title track on the band’s sophomore set, Aggressive, plays like a BEARTOOTH mission statement. The song boasts impassioned throaty verses, pressure mounting build-ups, cathartic breakdowns, crowd moving bounce and savage riffs. “Who knew you’d be hated for being who you are? And be a big target for all the insecure?” Shomo croons at the start of “Hated,” an outsider anthem with the urgent momentum of the best of the ‘90s punk set with a soaring Active Rock chorus. “Loser” is every bit as driving as Foo Fighters or Rise Against, with the sweaty exuberance championed in the underground scene. Alternately, “Always Dead” is a circle-pit inciting banger worthy of any hardcore festival, while “Rock is Dead” makes for a huge exhale from serious reflection into full-blown reckless celebration.

Nobody comes to a BEARTOOTH show to stand around. The audience craves involvement, yearns for participation, insists on mixing it up and always sings along. BEARTOOTH’s Sick EP (2013) and Disgusting (2014) debut full-length saw Shomo painstakingly executing all of the instrumentation and vocals himself, working to exorcise the demons of a deep depression, self-doubt, and creative frustration. Aggressive is a natural step forward, defying the temptation to remain in despair.

“I want people to understand that I get it,” Shomo explains with characteristic honesty. “We’ve all been there. A lot of us are still there and a lot of us will go back to that place. But you don’t have to let it win or let it define you. Whatever you need to fight depression, whatever it takes to fight this darkness in your life, if you really put your head against it and really fight for it, you can overcome and come out on top.”

Shomo and his bandmates are more than happy to let BEARTOOTH define them. Aggressive is filled with screaming verses, soul moving riffs, and mosh parts, yet at the same time, it’s incredibly catchy. That’s what BEARTOOTH does best: bridging raw authentic intensity with accessibility, much like the balance between the sobering reality of personal demons and the hope attainable through perseverance.

“This band is who and what I am now,” Shomo says proudly. “I want this band to be the stamp I leave with my name for the rest of my life. And I want this record to prove it. This is my chance to prove, to myself, that BEARTOOTH isn’t a fluke.”

Nothing about Shomo’s career could be described as a “fluke.” ‘Though still in his early twenties, he’s experienced many of the highs and lows associated with creative expression, underground subculture and commercial charts. Starting as Attack Attack!’s keyboard player at age 15, the Columbus, Ohio native had moved into the frontman position by the time their third album debuted Billboard’s Top 10. Shomo eventually left Attack Attack! in order to face his depression and anxiety directly.

BEARTOOTH began as a purely solo expression of pain and mental illness. Following the recruitment of guitarists Taylor Lumley and Kam Bradbury, bassist Oshie Bichar, and the band’s original drummer, to tour in support of Sick and Disgusting, BEARTOOTH evolved into something more resembling a traditional band. The setup is similar to entities like Marilyn Manson, The Cure or Nine Inch Nails, where one person leads the charge creatively but feeds off the energy of trusted confidantes and comrades-at-arms who execute the overall vision.

Shomo spent a grim Midwest winter back in his basement, obsessively tinkering with BEARTOOTH’s much-anticipated follow-up to the point of exhaustion. He’d tried sharing the workload with outside mixers on the first album, but there are so many nuances to BEARTOOTH’s sound that none of the people he tried quite got it.

Enter veteran hit-maker David Bendeth, whose discography includes important albums by Paramore, Breaking Benjamin, A Day To Remember, and Taking Back Sunday. Sensing something of a kindred spirit, Shomo entrusted Bendeth with mixing duties on Aggressive, soaking up the producer’s knowledge and experience.

The new BEARTOOTH album also features a bit of co-songwriting contribution from John Feldmann, whose work as producer, mixer, and cowriter includes albums by Good Charlotte, The Used, and 5 Seconds Of Summer.

“The process of making this record was truly life changing, more than any other experience I’ve had in a long time,” says Shomo, who worked hard to get in better physical shape, too. He points to one two hour-long conversation with Bendeth as pivotal in the album’s journey and speaks affectionately of Feldmann as well, who he credits with helping to bring out some of the brighter/melodic spots on Aggressive.

“It was a really delicate process. The reason I was able to work with those two is because we’re so close, it’s become a little family.  They have a lot of respect for what I do and how I like to do it. They really understood what it means to me mentally to make a BEARTOOTH record. All they want to do is take that process further, push the envelope, get better songs out of me and for the record.”

Part of that process involved drawing upon the past two years of touring. “If I was at a show, which parts would have me wanting to jump on top of people’s shoulders to sing along as loudly as I can? What part will really pull me into a show? Sure, there are heavier songs and more chilled out songs. But I don’t want there to ever be a dead moment. I want everything to have an intense vibe and good energy to it.”

Disgusting dealt primarily with self-hatred. This time around, on Aggressive, there’s a different type of aggressiveness driving the proceedings thematically. “Look at an orchestra: nobody is saying a word but some people literally live and die for it. It touches you. It moves you,” Shomo points out. “I do not want to be one of those people leading people into a weird place with the lyrics just because they’re captivated by something else in the song. I want people singing along to things that empower them, that make them want to go out and experience life in new ways.”

What once belonged solely to Caleb Shomo in his basement has been shared with the world, connecting with an increasingly broad audience. Now BEARTOOTH belongs to the people as much as it did to the person. Aggressive is an inevitable evolution, as BEARTOOTH sinks its bite into the world.