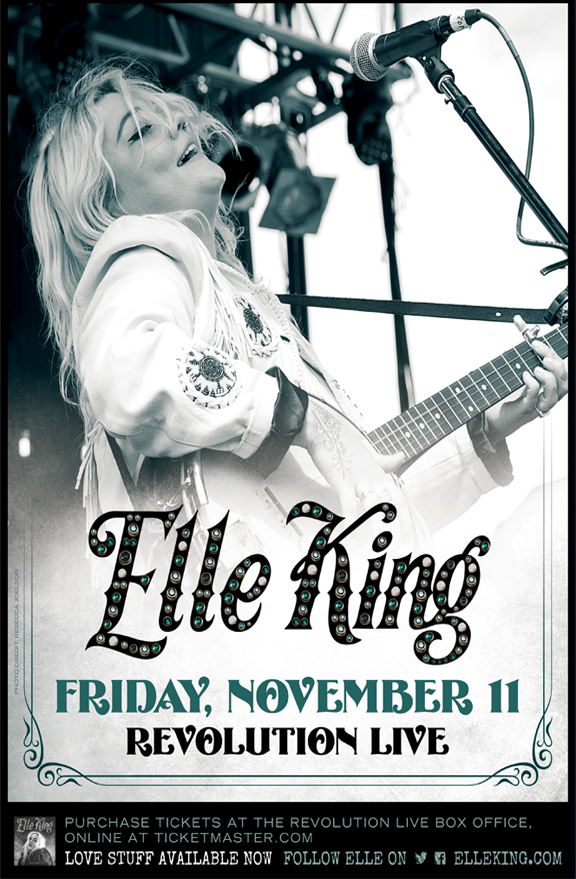 Elle King recently released brand new single “Good Girls” featured on the Ghostbusters Soundtrack due out July 15th on RCA Records. She also dueted with Dierks Bentley on his massive hit “Different For Girls” and will be joining the Dixie Chicks on tour for select dates in September and October. Elle King will be performing as part of Good Morning America’s Summer Concert Series on Friday, July 15th.  King recently wrapped her sold out U.S. headlining tour this April along with a run of festival dates including Boston Calling, Governors Ball, and Firefly.

Elle King has taken the world by storm with the release of her debut album LOVE STUFF last year. Her  hit single “Ex’s & Oh’s” was nominated for 2 Grammys and 2 Billboard Music Awards, was certified double platinum, and she made chart history, becoming the second female artist in 18 years to reach #1 at Alternative Radio, following Lorde’s #1 with “Royals” in 2013.  Her single also claimed the #1 spot on the AAA Chart, #1 at Hot AC, and #1 spot on the Billboard “Hot Rock Songs” with “Ex’s & Oh’s, becoming the 4th female led act/artist to top this chart in its 6 year history. Elle recently released the video for her new single “America’s Sweetheart” and performed Sweetheart on The Tonight Show Starring Jimmy Fallon, The Ellen DeGeneres Show, and The Late Late Show with James Corden. Elle will be the opening act on several dates this fall for The Dixie Chicks.  She has received much critical acclaim — Jon Pareles of The New York Times described her as “a sassy, hard-drinking, love-’em-and-leave-’em hellion with bad tattoos and a broad pedigree across rock, pop and country. She has Adele’s determination and Joan Jett’s stomp, Brenda Lee’s high-voiced bite and some AC/DC shriek.”  Elle has been featured by The Wall Street Journal, Teen Vogue, People Magazine, USA Today, and many more.