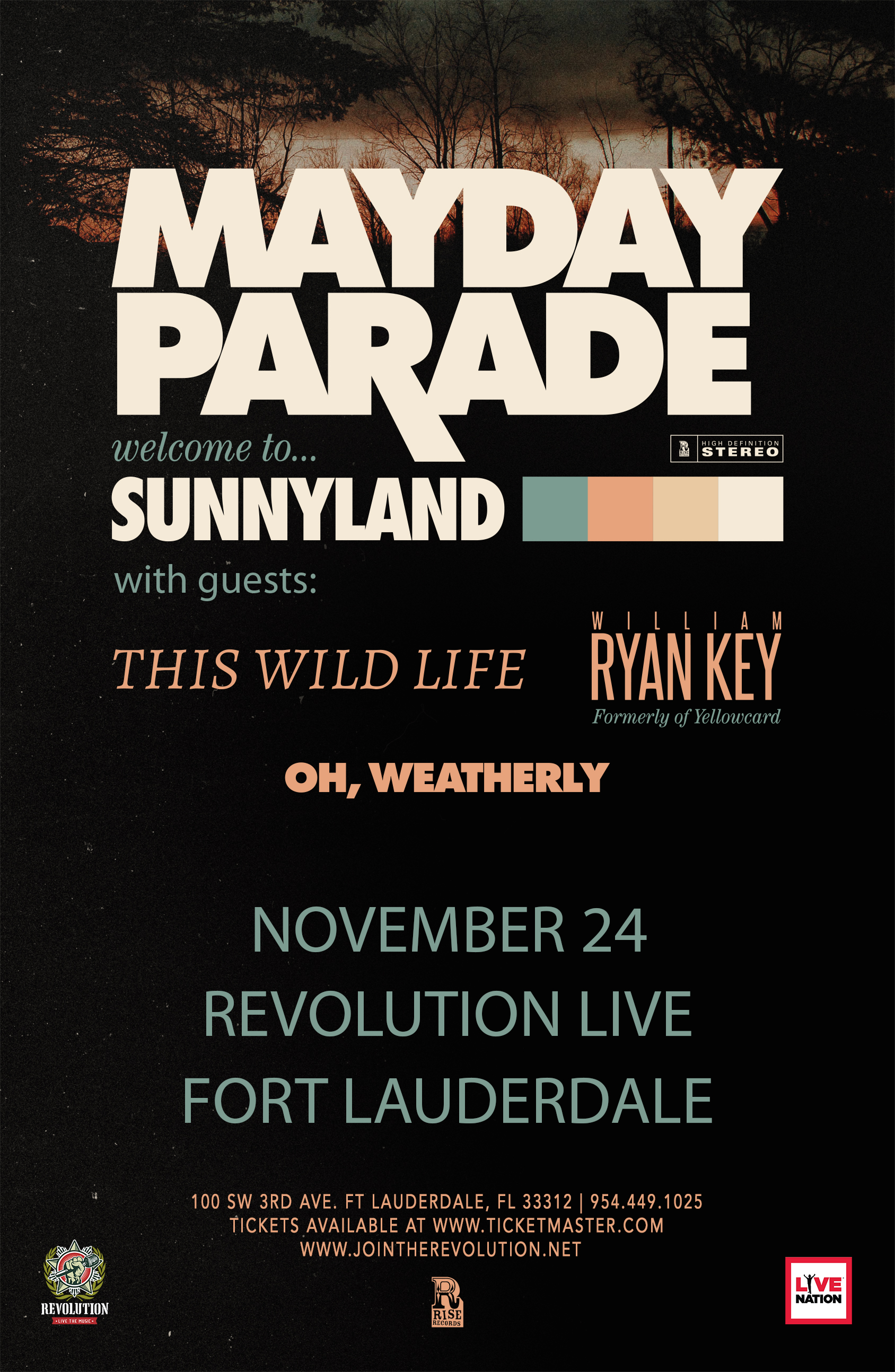 With This Wild Life, William Ryan Key, and Oh, Weatherly

American rock band Mayday Parade made their debut in the mid-aughts with the gold-certified A Lesson in Romantics, which featured a passionate emo-punk sound similar to contemporaries like Yellowcard, Plain White T’s, and All Time Low.

Into the 2010s, they incorporated a harder rock edge that fleshed out their punchy roots on releases like the Top 10 Monsters in the Closet (2013) and Black Lines (2015).
The outfit arose from the merger of two popular Tallahassee local bands, Kid Named Chicago and Defining Moment, whose combination helped the unit amass a quick buzz around its hometown scene. The sextet was initially comprised of vocalist Derek Sanders, vocalist/guitarist Jason Lancaster, bassist/vocalist Jeremy Lenzo, drummer Jake Bundrick, and guitarists Alex Garcia and Brooks Betts. After playing shows on the 2005 Warped Tour, along with sporadic gigs alongside bands like Armor for Sleep, the Rocket Summer, the Starting Line, and Emery, the band issued its debut EP, Tales Told by Dead Friends, signing with Fearless Records a month later. Their first full-length, A Lesson in Romantics, was completed in January 2007, but by the time it was released that summer, the band would be one singer short after founding vocalist/guitarist Lancaster parted ways with the group in March 2007 (Lancaster would go on to form a new band, Go Radio).

Mayday Parade signed with Atlantic Records in early 2009 and issued their first album without Lancaster, Anywhere But Here, later that year. In 2011, the group issued a pair of efforts, starting with the Valdosta EP in March and their Fearless-issued, eponymous third long-player in October. Mayday Parade peaked at number 12 on the Billboard 200, their highest-charting effort to date. The Zack Odom- and Kenneth Mount-produced Monsters in the Closet followed in early 2013 (along with a deluxe edition the following year), besting their self-titled album’s placement with a Top Ten debut on the Billboard chart.

In 2015, the band released its fifth album, Black Lines. Landing just outside the Top 20, the set was the last of their albums for Fearless. After the 2017 release of the tenth anniversary reissue of their debut EP, the band repackaged the gold-certified A Lesson in Romantics as well, complete with demos and commentary. They signed with Rise Records and returned in 2018 with sixth album Sunnyland.