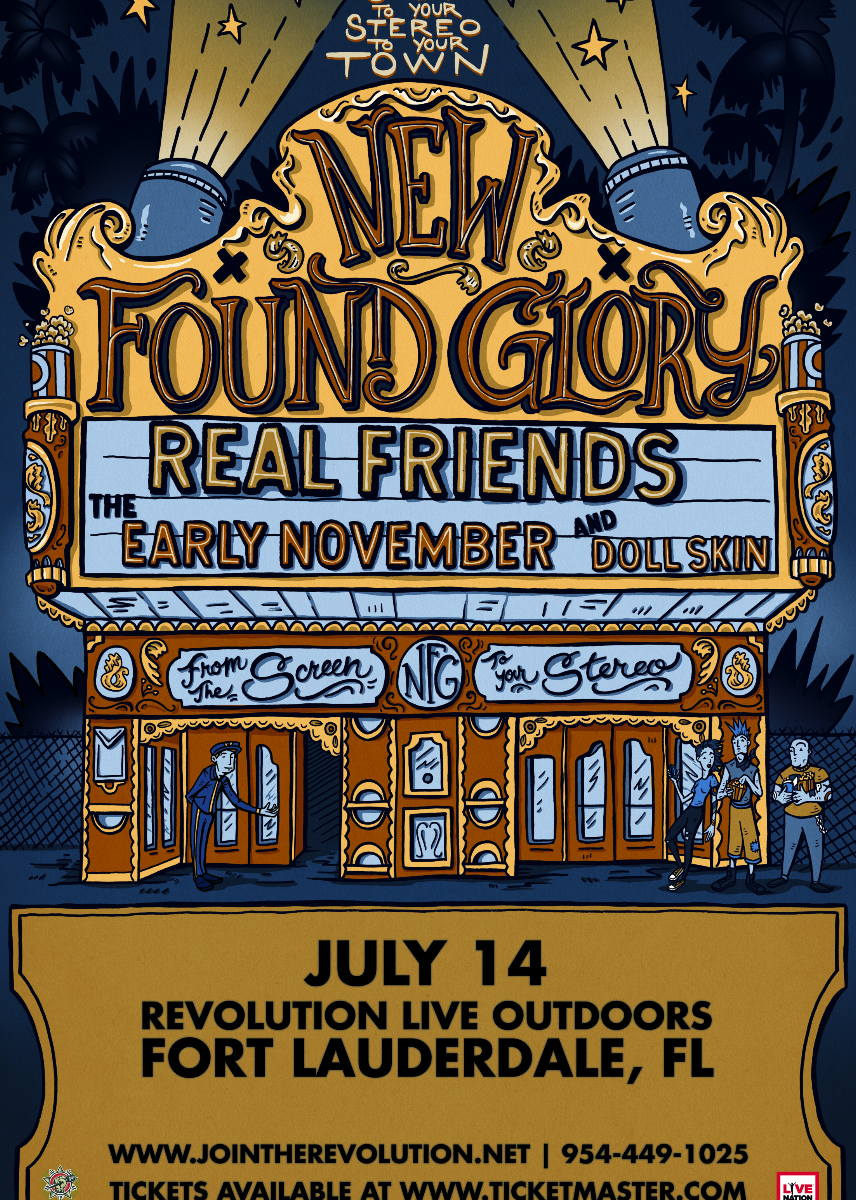 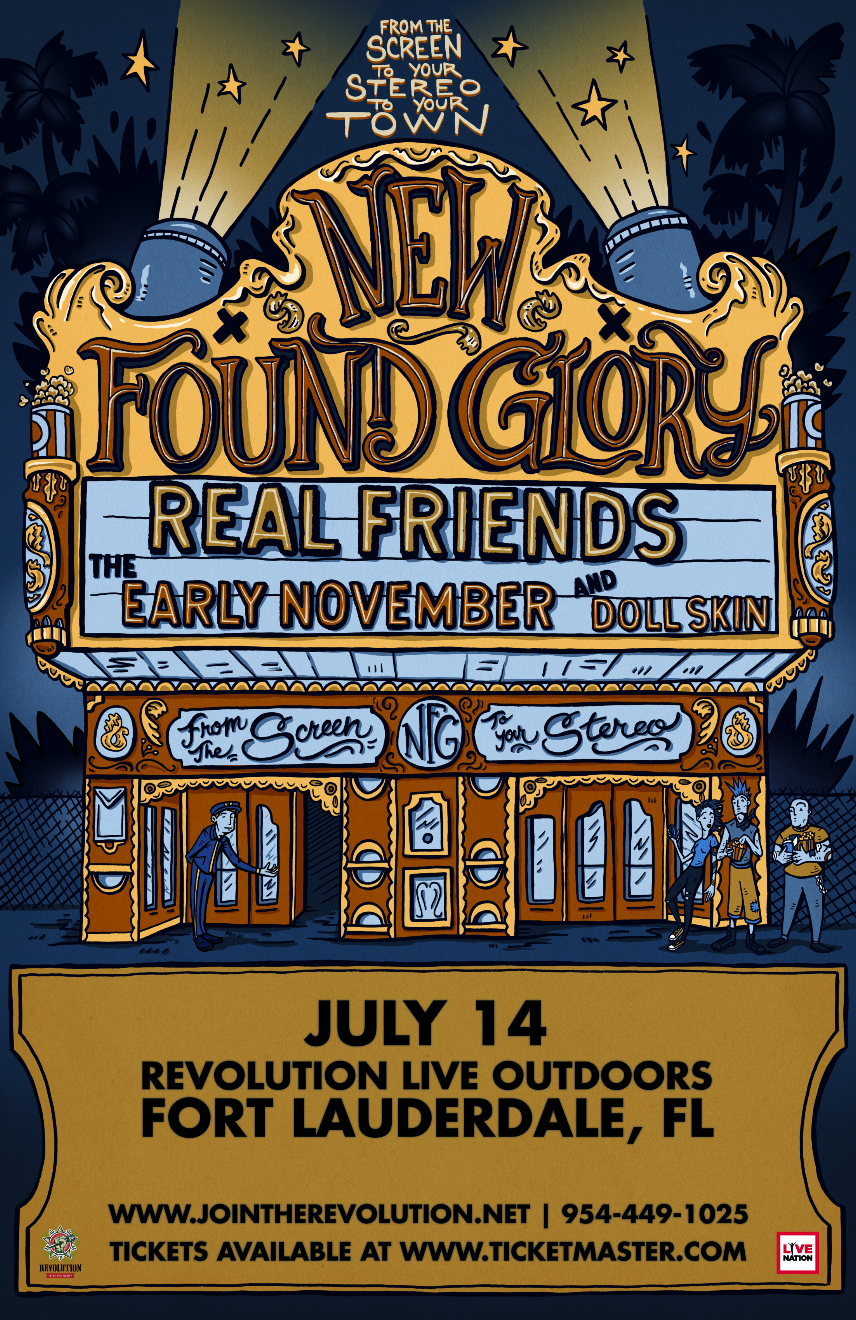 Please Note: This show is at Revolution Live Outdoors (the America’s Backyard stage). All tickets are General Admission / standing room only.

Renowned for their energetic live shows, A New Found Glory toured up and down the East Coast in the late ’90s, selling out the entire pressing of their 1997 debut EP, It’s All About the Girls, along the way. (The EP was released by Fiddler Records, which later reissued Girls with new cover art in 2003.) The full-length debut effort Nothing Gold Can Stay followed in 1999 on Drive-Thru Records, and the album was reissued later that year when A New Found Glory signed a major-label contract with MCA. Another EP, 2000’s From the Screen to Your Stereo, found the boys tackling a number of cover songs; the disc also paved the way for the release of the band’s first gold-selling album, the self-titled New Found Glory, which appeared later that year. The latter album marked the official debut of the band’s new moniker, which dropped the indefinite article A from their original name. A high-profile tour with blink-182, an opening slot on the Warped Tour, and an appearance in the teen flick American Pie 2 helped increase New Found Glory’s exposure, and they stepped back into the studio at the end of 2001 to work on a follow-up record.

The results of those recording sessions were released in the summer of 2002 as Sticks and Stones. Propelled by the hit single “My Friends Over You,” New Found Glory snagged a headlining spot for the 2002 Warped Tour and watched their album climb to gold certification. After the tour and its resulting hype, the band then reentered the studio with a newfound restlessness. The result, issued in May 2004, was Catalyst, which found their sugary punk-pop steeped in new influences ranging from hardcore to thrash to new wave. The concert DVD This Disaster: Live in London appeared later that year, documenting the band’s strength as a live act.

Catalyst peaked at number three on Billboard’s Top 200 and eventually went gold, propelled in part by the success of “All Downhill from Here.” Hooking up with producer Thom Panunzio (Ozzy Osbourne, Tom Petty), New Found Glory released their mature fifth full-length, Coming Home, in September 2006. As before, they immediately hit the road in support of the album, adhering to a lengthy schedule of headlining dates throughout the U.S. and U.K. with the Early November and Cartel in tow. The second edition of From the Screen to Your Stereo arrived in 2007, featuring pop-punk covers of songs like Lisa Loeb’s “Stay” and Simple Minds’ “Don’t You Forget About Me.” The group then joined the roster at Epitaph Records and set to work on a new album, Not Without a Fight, with blink-182’s Mark Hoppus in the producer’s seat. Two years later, New Found Glory went back to working with producer Neal Avron, who had worked with them on Sticks and Stones and Catalyst, for their seventh album, Radiosurgery.

Kill It Live, a live album that also featured a trio of new studio tracks, arrived in 2013. Also in 2013, the band parted ways with guitarist Klein after he was charged with several counts of lewd acts with underage girls. However, rather than replace Klein, the remaining bandmembers decided to continue on as a four-piece with Gilbert handling all the guitar duties. In 2014, the four-member New Found Glory delivered Resurrection, which found them diving into their punk roots with a renewed sense of purpose. The album was re-released in 2015 as Resurrection: Ascension, featuring two new studio tracks and a reworked version of “Vicious” with Paramore’s Hayley Williams. In 2017, New Found Glory celebrated their 20th anniversary with the release of their ninth album, Makes Me Sick, and a tour during which they would play several of their best-loved albums in their entireties. Makes Me Sick featured the singles “Happy Being Miserable” and “Party on Apocalypse.”

New Found Glory’s upcoming EP, From the Screen to your Stereo, will be released in 2019.