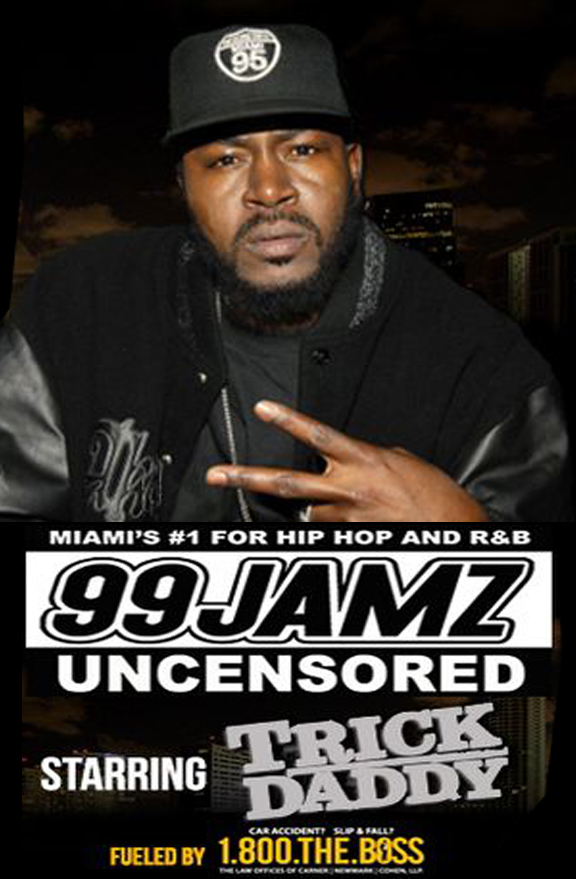 One of the most thuggish rappers ever embraced by the mainstream, Trick Daddy broke out of the South in 2001 with “I’m a Thug” and established himself as an unlikely national superstar. Before his breakthrough, he scored a few regional hits here and there but remained largely an underground rapper. In particular, he became known for his club anthems, which were characterized by their rousing beats and his rowdy lyrics. “Nann Nigga” and “Shut Up” became his best-known early successes, each featuring a feisty young rapper named Trina, who would go on to her own success in subsequent years. When Trick Daddy finally did break into the mainstream in 2001 with the appropriately titled “I’m a Thug,” it came as somewhat of a surprise. No one questioned his talent, but his image hardly matched that of other mainstream rappers. He certainly lived up to his thug billing, known as much for his rapping as his trademark omnipresent grimace, bald head, prickly whiskers, forearm tattoos, and gold grill. Nevertheless, thug or not, Trick Daddy became a national superstar, earning substantial mainstream airplay and climbing atop the Billboard charts.

Born Maurice Young in Miami, Florida, the rapper originally known as Trick Daddy Dollars earned his stripes in 1996 as one of the lead rappers on Luke’s “Scarred,” the leadoff track from the former 2 Live Crew leader’s Uncle Luke album. The song became a sizable hit among the booty crowd, and listeners were drawn to the remarkably fluid and quick flow of Trick Daddy Dollars. Among those drawn to him was Ted Lucas, a former concert promoter who signed the rapper to his newly formed Slip-n-Slide Records. The debut Trick Daddy Dollars album, Based on a True Story, came soon after, released in late 1997. The album sold well for an independent release, driven by some regional hits, but didn’t impress too many people outside of the Miami area.

A year later everything changed with the release of www.thug.com (1998). Trick Daddy dropped the “Dollars” from his name and scored himself a break-out hit with “Nann Nigga,” a club-banger that pitted him against a female nemesis, the then-unknown Trina. The hit spread throughout the South and even trickled out into the Midwest and Southwest, so much so that Atlantic Records took interest and signed Trick Daddy to a record deal. The first Atlantic release, Book of Thugs: Chapter AK Verse 47 (2000), fulfilled its promise, setting the stage for the rappers eventual commercial breakthrough. Driven by “Shut Up,” a rowdy club hit similar to “Nann Nigga” and again featuring Trina, Book of Thugs extended Trick Daddy’s reputation from coast to coast and established him as one of the Dirty South’s more promising talents.

The big payoff came a year later with the release of Thugs Are Us (2001), the album that catapulted Trick Daddy alongside Ludacris and Mystikal as one of the few nationally championed Dirty South rappers, and it similarly catapulted him onto the playlist of every urban radio station in America, not to mention MTV. In particular, the album boasted “I’m a Thug,” Trick Daddy’s biggest hit yet, and more importantly, his most accessible. Despite his tattoos, gold grill, and overall thuggish aura, Trick Daddy earned mainstream airplay and climbed the Billboard charts. A year later he did so again with his fifth album in six years, Thug Holiday (2002), and its lead single, “In da Wind,” perhaps Trick Daddy’s most inventive work yet. Thug Matrimony: Married to the Streets appeared two years later, boasting the hit “Let’s Go,” a Lil Jon production notable for its heavy sampling of Ozzy Osbourne’s heavy metal classic “Crazy Train.” Returning to the street sound that made him famous, the 2006 release Back by Thug Demand was a more traditional Trick Daddy album. In 2009 he launched his own Dunk Ryders label with the album Finally Famous: Born a Thug Still a Thug. His 2012 mixtape, Dick & Dynamite, announced the launch of another label, this time simply called Trick Daddy Music. The U Already Know EP followed on the label in 2014