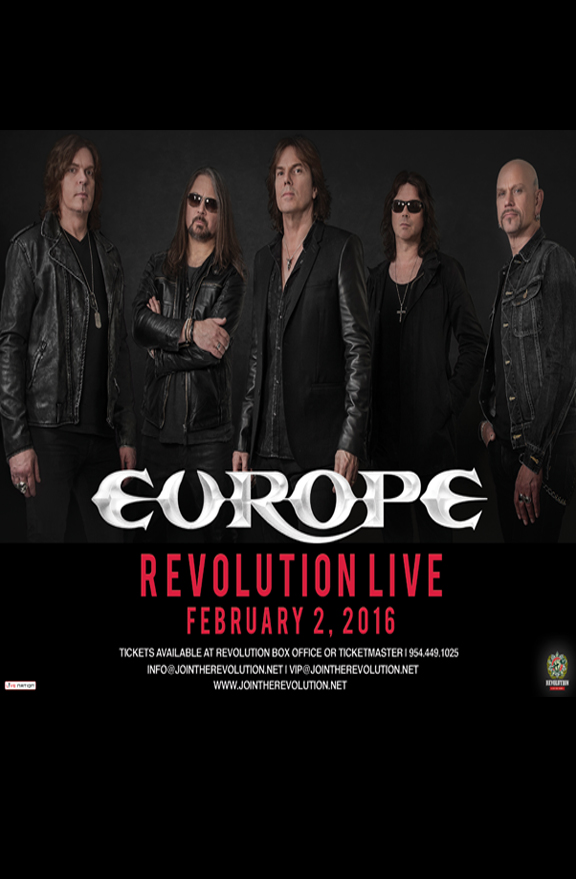 WAR OF KINGS is released World wide on German based label UDR, with JVC Victor handling release in Japan. Produced by Dave Cobb, War of Kings has the sound and deep expression that only great musicians with experience can produce.

As Joey puts it “War Of Kings is the album we always wanted to make, ever since we were kids listening to bands like Zeppelin, Purple and Sabbath.”

A brief history that brings us to now:

It all started in a small suburb outside of Stockholm, Sweden. Joey and John met and formed the band Force. They both were into British rock bands like Thin Lizzy and UFO.

Led Zeppelin and Deep Purple also made an immense impact on these teenagers. They recorded their first demos when they were only 16 and 17 years old. Record companies turned them down, saying it was ′too much guitars and their hair was too long′. But with the new name Europe they proved everybody wrong. They won a rock band competition and the first prize was a recording contract. When “Europe” was released in 1983, kids in Sweden and Japan really identified with their music. The second album ′Wings of Tomorrow′ already gained attention from all over the world. Soon Epic Records, New York (now Sony Music) got interested and signed a million dollar contract. When it was time to release their third album ′The Final Countdown′, they had Journey—producer Kevin Elson onboard and a major American label behind them. Touring the UK, US and the rest of the world had always been the boys dream. They had put in the dog years and it was time for the big success. ′The Final Countdown′ sold 7 million records worldwide and the single was number one in over 25 countries and still is a big anthem all over the world until today. The album spent 70 weeks on the Billboard Charts and had four Top 40 singles. Europe made it. They were constantly on the road all over the world but eventually found time to hook up with producer Ron Nevison (UFO, Led Zeppelin) to record their 4th album ′Out Of This World′. With the new hit ′Superstitious′ on the airwaves, they embarked on another 2—year—long world tour. In 1990 they relocated to Los Angeles to record their 5th album, ′Prisoners In Paradise′, followed by yet another extensive world tour. By then the band had constantly been recording and touring for 10 years and it was time for a break.

2004 the band returned with the powerful ′Start From The Dark′. The plan was to slowly build up a relationship with fans and the music world again. The album caused controversy with its raw, heavy detuned sound, but was a great platform to build on. 2006 they recorded ′Secret Society′ — another heavy rocking album. With this album, the British rock press started to take the band serious. The band continued to tour worldwide but now started to get invited to play the UK on a regular basis, with steadily increasing concert attendees. One of their most successful record since returning to the scene was released in 2009: ′Last Look At Eden′. With the bombastic title track and the ballad ′New Love In Town′, Europe broadened their fan base even more to become one of the most successful bands in their genre and returned to the pole position of the official album charts in their home country. At the end of April 2012, the 9th Europe—album, ′Bag Of Bones′, recorded at Atlantis Studios in Stockholm, was released worldwide. Spawning the singles/videos ′Not Supposed To Sing The Blues′ and ′Firebox′, The Kevin Shirley produced record did such a great job capturing the spirit of this band. With continued touring and an ever growing fan base, Europe entered the brand new PanGaia Studios in Stockholm (the first band to ever to record there) to record ′War of Kings′. In keeping with the vibe of the previous two releases and in hopes to take their newfound creativity to even higher levels, the band chose producer american producer Dave Cobb who had done such an amazing job on recent releases by Rival Sons. Joey adds “And after hearing Dave Cobb amazing production for Rival Sons we simply had to work with him!”

And the result is an immense album that corners everything this band is about in 2015 — a huge ′classic′ sound that encompasses the bands talent and draws from all the classic bands and influences from the 70′s, with a vital current sound!

′War of Kings′ the album, featuring the title track as first single (released February 2nd) is unleashed on the public the day the WOK World tour starts — March 2nd 2015, with the band playing Dublin Ireland for the first time in 25 years. What a great way to kick it all off.

Joey Tempest: “Hey! We took the long road! But we wanted to re—establish Europe the proper way. It′s taken 10 years and countless tours since the reunion, but we′re finally getting there and we′ve done it our way!