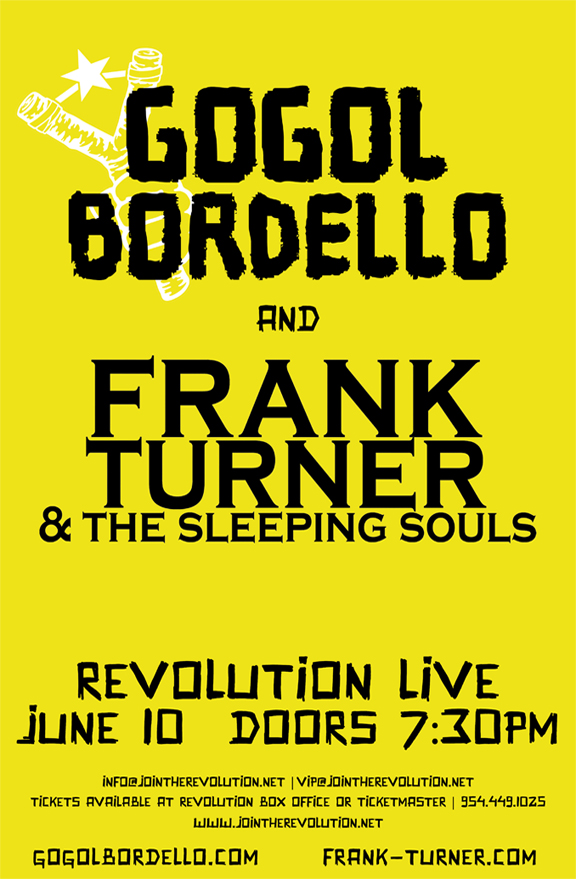 “I’ve come full circle and I’m comfortable being a total outsider,” says Gogol Bordello’s Eugene Hutz, explaining the philosophy behind the band’s new album, Pura Vida Conspiracy. Like everything they’ve ever done, this outing is an uncategorizable blend of international influences, anchored by the gypsy rhythms Hutz grew up with in Ukraine. “Most people are looking for a box to put stuff in,” he says. “I try to avoid it. The message of this record is the quest for self-knowledge beyond borders and nationalities. Every culture is a useful mask, but it is just a mask. To get to know your actual human self, you have to get behind all the masks. With all the time I’ve spent in Latin America, living and loving, I realized I’ll never be Argentinean or Brazilian, just like I’ll never be Ukrainian. If you have true human spirit, you can’t fit into any genre, nationality or culture. To be a true citizen of the world, you can only be an ultimate outsider.”

Hutz chose Pura Vida Conspiracy as the title because it represents everything the band has been moving toward since they first formed over a decade ago. “We’re not a whimsical band with a whimsical message and some languages offer things that others don’t. As I made my way through Spanish, the phrase ‘pura vida’ – pure life – struck me. In Spanish, ‘pura vida’ has the gusto that true life should have, as opposed to words in English, French or Russian. It sums up my need of joining fragmented parts and pieces to create a worldwide consciousness. It’s what we’ve had in mind since the first song on the first Gogol Bordello album.”

The band did pre-production on 30 songs at studios in Mexico, Paraguay and Burlington, VT narrowing it down to the most compelling tunes for the album. The arrangements were done on the fly, with the musicians contributing ideas from their own areas of expertise. “Our sound comes from being a group of polyamorous musicians. The style comes from musicians born and raised in various elements, like (bass player) Thomas Gobena’s Ethiopian meters and (Russian violinist) Sergey Ryabtsev and (folkloric Russian accordion player) Yuri Lemeshev’s palette of colors. Everyone does their own thing to keep the train moving.”

Andrew Scheps, who was the recording engineer on 2010’s Trans-Continental Hustle, the band’s last album, stepped into the producer’s chair and helped them capture the feel of their vibrant live performances. “Andrew is a saint,” Hutz says. “From the first time we met, I felt like he was part of our family. He was keenly aware of our musical evolution and encouraged us to encapsulate the passion and experimental energy we’ve accumulated in the last few years of intense world travel.”

“The Way You Name Your Ship,” suggests a rocking boat, with a subtle funk backbeat and a swaying off center rhythm. Ryabtsev’s violin, the fuzz heavy guitar accents of new guitarist Michael Ward and the band’s rousing vocals add to the feel of a pirate vessel on a rampage. “The song is about the power of the word and its intent,” Hutz explains. “Naming your ship determines where you go and how you get there.” Gogol adds primal rock guitar to the bold stomping rhythm of “We Rise Again,” one of the album’s most anthemic tracks. Percussionist Pedro Erazo-Segovia drops a Spanish rap into the maelstrom of Ryabtsev’s violin, Ward’s power chords and Hutz’s furious vocal. “This is the album’s definitive song. The Russian poet Yevtushenko first said that political borders are scars on the face of the planet. Like us, he thought of himself as a citizen of the world.”Italian flavored mandolin, a reggae pulse and scorching Russian violin drive “Dig Deep Enough,” a song that veers between blistering punk and a laid back one drop rhythm. Hutz sets its inspirational message to a classical melody. “Powerful melodies in classical music are often taken from folklore,” Hutz says. “We’re borrowing it back, with an added bit of Ennio Morricone.” Gogol brings a taste of country music to the Latinized Ukrainian rhythm of “Lost Innocent World,” with the vigorous drumming of Oliver Charles.

Gogol shows its omnivorous mastery of music on “I Just Realized,” a contemplative love song that suggests a Russian samba and features Elizabeth Sun’s sultry backing vocals; “John The Conqueror” a blend of spaghetti western twang and punk; and “Malandrino,” a Neapolitan style tune that dips into Tex Mex, mariachi and reggae. The band’s long time goal of creating a global style of music is fully realized with the heartfelt tunes on Pura Vida Conspiracy.

“What makes Pura Vida Conspiracy so strong is that, unlike other records we’ve done that are also musically polyamorous, this one combines our adventurous spirit with a stronger rock anchor,” Hutz says. “People ask how I had the confidence to attempt this task and I tell them it was not confidence. I had a feeling I needed to do it, but no idea if it would work out. When we scream on stage it’s to acknowledge all cultures are beautiful masks, but they only take you so far – to a nice carnival or masquerade. True human spirit is beyond culture, that’s why my main interest is in human potential. Music is a way to explore that and you can see how it links up with the idea of pura vida. ‘Pura vida’ is pure life, ‘conspiracy’ is word play on the fact that most of the people in the world are so focused on everything going wrong that they fail to see the 50% that’s going right.

“Gogol Bordello’s music gives me confidence to say that. It’s music that goes into the depth of now and opens the consciousness to another dimension that’s usually hidden from people. This accumulation of playing for thousands of hours in Gogol Bordello has connected me to the energetic self, the true human spirit. When you preserve this feeling and transfer it into real life, it becomes a huge part of you.”

Hutz founded Gogol Bordello in New York City in 1999, after leaving Ukraine in the aftermath of Chernobyl. In keeping with his vision of creating an international groove, he recruited musicians of all ages, races and cultures, including bassist Thomas Gobena, from Ethiopia, Russian violinist Sergey Ryabtsev from Moscow and percussionist Pedro Erazo-Segovia from Ecuador.

The band’s endless touring and critically acclaimed shows have made them international headliners. These days Hutz divides his time between New York and Rio de Janeiro, but a recent stay in Ukraine also influenced the songs he wrote for Pura Vida Conspiracy. “When I stayed in Kiev for months, people thought it was my victory lap back home. When I told them I was leaving, they were disappointed that I didn’t want to be the rock guy on Ukraine TV. Spending time in a Zen monastery and that trip back home made me certain of my mission as an ultimate outsider.”