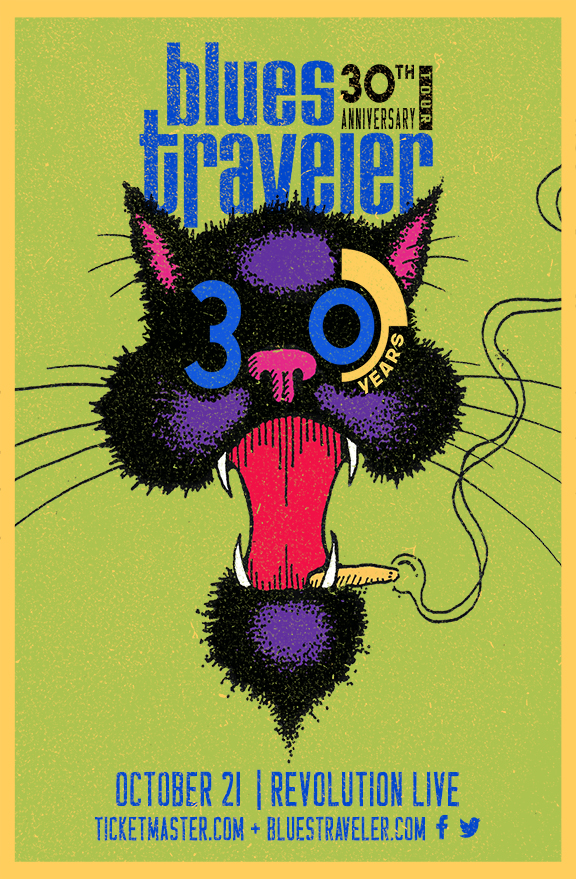 Blues Traveler started their career in the late ‘80s, and went on to become one of the most widely known artists in the jam-band scene. In celebration of their monumental 30 year career, Blues Traveler has announced that they will embark on a 30 Year Anniversary tour this October. Kicking off on October 11th at the Ridgefield Playhouse in Ridgefield, CT, the 25 date run will take the band across the US, wrapping up at the House of Blues in San Diego, CA on November 19th.

Pre-sale tickets will be available for purchase starting on Tuesday, April 25th and tickets for the general public will go onsale on Friday, April 28th starting at 10:00 a.m. local time. To purchase tickets and find more information on pre-sale options, please visit www.bluestraveler.com. A full list of confirmed dates can be seen below.

Frontman John Popper states, “Three decades… three decades and I am still surprised when we play and find some rich new musical vein to tap. Three decades and I cannot believe my luck with this band of brothers and this string we have run! Thirty years since a bunch of loud boys embarked on an adventure that took them around the world and made them a family that has not ceased growing to this day. Thirty years later and I am still so very grateful.”

Guitarist Chan Kinchla adds, “The longer I do it the more I like it! I remember laying on my bed at 13 years old in Princeton, New Jersey. Spinning my precious LPs, dropping the needle back across a part over and over trying vainly to scry some part of a Bowie record or a Clash record or a Pretenders record, maybe gazing at the back of the album jacket as side A played again and again. All I dreamed of was playing in a cool band with great musicians, in front of a bad ass crowd, creating a floating, bubbling, hissing group. Think rock show in the shiny lights. The fact that I’ve been able to be a part of exactly that for 30 years leaves me humbled and thankful and wanting more….much more!”

Blues Traveler — John Popper (lead vocals, harmonica), Chan Kinchla (guitar), Tad Kinchla (bass), Brendan Hill (drums), and Ben Wilson (keyboard) — have a proven reputation for their improvisational live shows and tireless touring. With a total of twelve studio albums — four gold, three platinum and one six-times platinum — they have sold more than 10 million combined units worldwide, and played over 2,000 live shows in front of more than 30 million people. Their hit “Run-Around” is the longest-charting radio single in Billboard history, and earned them a Grammy® for Best Rock Performance by a Duo or Group with Vocals in 1996. The group also founded H.O.R.D.E. Festival, a touring progressive rock music festival and creative nest, hosting everyone from Beck and Neil Young to Ben Harper and Squirrel Nut Zippers.

Continuing the tradition of sitting in with other bands, Blues Traveler’s John Popper has sat in with countless artists all over the world, including Foo Fighters, Grateful Dead, Allman Brothers, Pearl Jam, Dave Matthews Band, Keith Urban, and even alternative acts like Passion Pit. With an open mind, it’s no surprise that on the group’s latest release, Blow Up The Moon, they took this a step further to enlist a range of artists across the musical spectrum, representing country, pop, reggae and hip-hop, on their first-ever collaborative album.

As they enter the fourth decade of their career, Blues Traveler will begin recording their a brand new album this May, expected for release in early 2018.