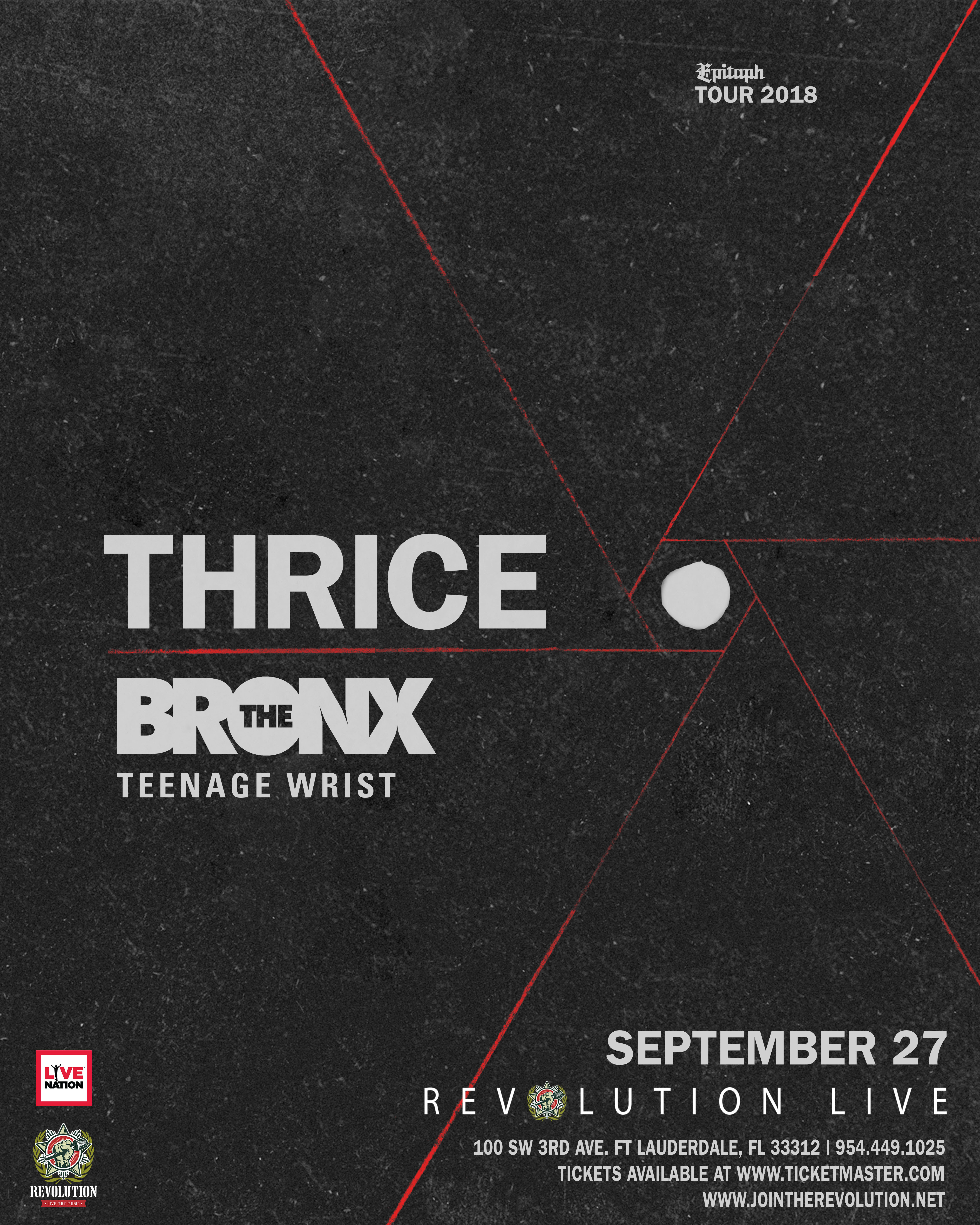 With The Bronx & Teenage Wrist

Posen signed the band in 2001, reissued Identity Crisis, and put Thrice on tour with Samiam. Tours with Midtown and Hot Rod Circuit followed, and eventually Thrice re-entered the studio with producer Brian McTernan. Although those recording sessions proved to be a trying period for the young group, The Illusion of Safety emerged and was later released in February 2002. Naturally, the band hit the road in support of the album, this time playing concerts alongside Further Seems Forever and Face to Face. Thrice also began headlining shows for the first time that year, and major labels began to take notice. Eventually, Island Records signed the band in June. A stint on the Warped Tour followed, and Thrice spent the fall playing club dates with Hot Water Music and Coheed & Cambria.

February 2003 found the band returning to the studio with McTernan but this time, Island Records was footing the bill. The focused effort The Artist in the Ambulance appeared in August 2003, featuring the hit “All That’s Left.” Thrice supported it with an ambitious slate of tour dates that included jaunts to Europe. The band also continued to involve itself with charitable organizations, having actively supported nonprofits and charities since signing with Sub City (the charitable arm of Hopeless Records). Portions of the proceeds from Artist in the Ambulance went to the Syrentha J. Salvo Endowment, which provides financial assistance for cancer screenings.

A new studio effort, the ambitious Vheissu, followed in October 2005, while the EP Red Sky appeared early the next year. A slew of new material arrived in 2007 and 2008, including a four-disc conceptual project entitled The Alchemy Index. Issued in two double-disc releases, The Alchemy Index, Vols. 1-2 focused on the elements of fire and water, while The Alchemy Index, Vols. 3-4 completed the cycle with air and earth. The quadruple concept was notable for the band’s newly incorporated textures and programming. They followed with two separate releases of live material, The MySpace Transmissions and Live at the House of Blues. Meanwhile, the studio effort Beggars appeared in 2009, evolving their sound even further with hints of Baroque indie tourmates the Dear Hunter and instrumental meandering similar to Radiohead. For their next album, the bandmembers went off on their own to work on new music before heading into Red Bull Studios with Dave Schiffman to put the songs to tape. The result was their seventh album, Major/Minor, which was released in the summer of 2011.

In 2012, the band announced a hiatus, which was to continue for three years. In the intervening time, Kensrue continued with his solo career, while Riley and Eddie Breckenridge played in Puig Destroyer and Angels & Airwaves, respectively. In 2015, Thrice returned with appearances at several major music festivals. Later that year, a new album was announced. Recorded with Eric Palmquist and entitled To Be Everywhere Is to Be Nowhere, it was released in May 2016.