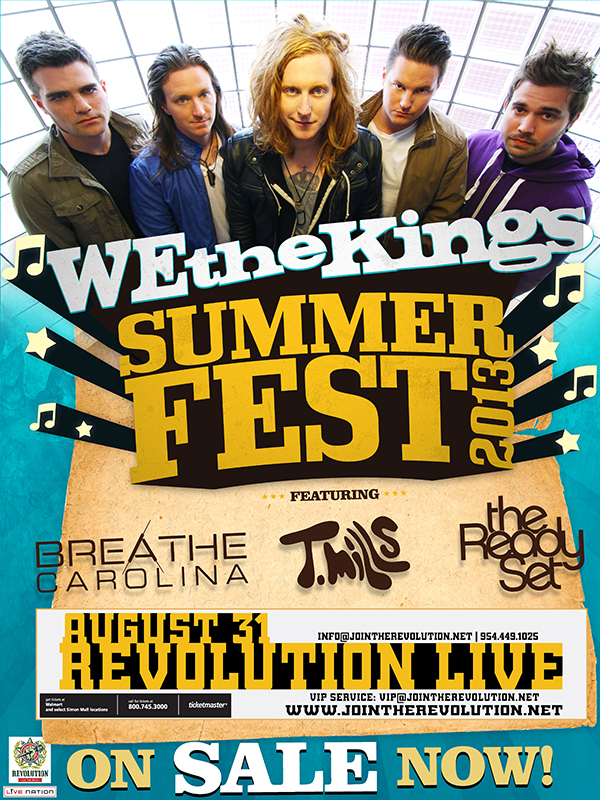 We The Kings w/ Breathe Carolina, T. Mills, The Ready Set, Dave Days, Like The Movies

We The Kings is an alternative power pop band that is from Bradenton, Florida and was formed in 2007. The band’s four members are Travis Clark (lead vocals), Hunter Thomsen (lead guitar), Drew Thomsen (bass guitar), and Danny Duncan (drums). We The Kings have come a long way since 2007. With two full legnth albums and many tours under their belts, they have proved themselves in an unapologetic industry. But where did it all start?

It all began when the guys met in junior high. Even though they became friends, they were in seperate bands. Travis was in a band called Broken Image. He hand picked the guys because they were the pick of the litter. In other words he “Cherry Picked” the other guys. At the same time, the newly formed band faced issues with it’s name. There were several other bands in the area called Broken Image. So they changed their name to DeSoto. Shortly after, they changed their name again, due to a lawsuit. DeSoto then became known as the We The Kings that we know today. The band’s new name was inspired by their middle school, King Middle School.

By 2007 they were signed to S-Curve Records. On October 2, 2007 We The Kings released their self titled album. On December 8, 2009 their second studio album Smile Kid was released. As of November 14, 2010 WTK have been in NY recording their third album We The Kings have an incredible resume. They have toured with bands like, Boys Like Girls, All Time Low, VersaEmerge, The Cab, The Academy Is, and many other bands. WTK also embarked on the summer fest called “Warped Tour”, in 2008, 2009, 2010.